There is no teacher shortage in Connecticut 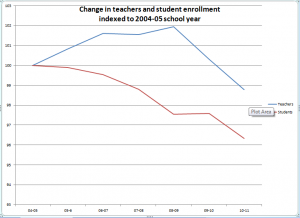 Jonathan Pelto had an interesting post over the weekend about unemployment in Connecticut. He criticizes the typically-reported unemployment rate and mentions the problems pointed to by other unemployment measures, something I have written about here and here.

Pelto goes on to write about how Connecticut has lost 16,000 government jobs (federal, state and local combined) since President Obama took office.

“This means that in just the last four years, there are 16,000 few jobs in schools and other government positions around the state,” Pelto writes. “The fact is, Connecticut’s children are returning to school in a couple of weeks with far few[er] teachers and support staff.”

Although it is possible Pelto’s fears might be true this time around, previous incarnations of this bogeyman have failed to materialize.

The recent decline in teaching jobs in Connecticut – 1.2 percent – has failed to keep up with the 3.7 percent decline in student enrollment between the 2004-05 school year and 2010-11, the most recent data available from the State Department of Education. 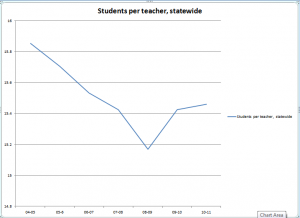 Do we actually know that of the 16,000 jobs lost, most were teachers? How many were planners, DPW workers, Parks and Recreation workers, cops, fire fighters, clerical and other “general government” positions? I suspect quite a large percentage were not teachers. Second as for “teachers” perhaps if we stopped morphing our public school systems into do-all nanny state utopias, and focused on relevant skills and knowledge, we’d have more efficient and cost effective public schools. Personal transportation, medical services, subsidized breakfast, lunch and now in some places an after noon “snack,” counseling, etc, are taking over (have taken over) from academics. Metrics are simplistic and quantitative. The issue is qualitative. How do we explain the simple fact that a guy like John Larson, who is obviously of superior intelligence and possessing exceptional cognitive ability, rises to the very highest levels of American governance, despite having been taught in classrooms which I suspect had no fewer than 30 kids per teacher. And I’m pretty sure the only “counseling” he received was via the back hand of a nun.