Does CT have a long-term unemployment problem? 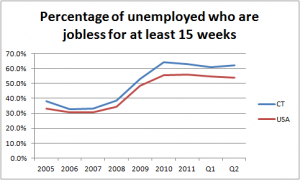 Most unemployed workers in Connecticut spend at least 15 weeks out of a job, which could suggest looming problems for both the economy and workers suffering the effects of long-term joblessness.

Out of 100 unemployed Connecticut residents, 62 will need more than 15 weeks to find a job, according to U.S. Department of Labor data. For 100 U.S. residents, only 54 would face long-term unemployment.

Lengthier periods of unemployment suggest structural causes, meaning the skills of the unemployed don’t match up well with the jobs that are available.

Two measures of Connecticut unemployment – the number of workers unemployed for 15 weeks or longer and the number of people losing their jobs recently – sit above the national average, while the unemployment rate itself remains better than the country’s as a whole.

The U.S. Department of Labor uses six different measures of unemployment, referred to as U-1 through U-6, with U-3 being the commonly referenced unemployment rate.

U-1, the percentage of workers unemployed for more than 15 weeks, held steady at 5.1 during the most recent reporting period. Nationwide, U-1 is 4.9 percent.

U-2, the percentage of workers who lost their job or completed temporary work, continues to exceed the national average as it has since 2011. Connecticut’s U-2 is 5.1 compared to 4.8 nationally.