Hartford schools are twice as expensive as 41 districts 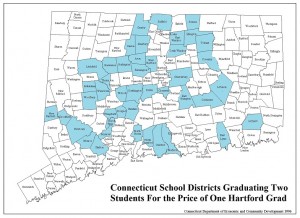 Forty-one Connecticut school districts are more than twice as efficient as Hartford schools.

Forty-one Connecticut school districts can educate two high school graduates for less than the cost of one Hartford graduate, according to Department of Education data.

That means nearly half of the 111 districts reviewed are twice as efficient as Hartford public schools.

New Haven, New Britain, Windham and New London are the other most expensive school districts.

The Tolland, Wolcott, Suffield, Madison and New Fairfield school districts are the most efficient in the state. They accomplished this by combining relatively low total costs per student and high graduation rates.

Madison School District, in addition to being the fourth most efficient district, also ranked in the top ten districts with highest rate of CAPT proficiency.

Madison is the only district to rank in the top ten for both efficiency and CAPT proficiency.

Shelton and Regional School District 14 were the only districts to decrease adjusted total costs, both by more than $6,000.

In DRG A, Darien, New Canaan and Weston school districts all boasted the state’s top average CAPT proficiency rate of 98.5 percent. However, Darien accomplished this rate while spending $13,000 less than both schools and the second lowest amount in the peer group.

DRG B had the highest concentration of low-cost districts. Thirteen of 18 school districts are among the most-efficient third of districts. All 18 schools had at least 91 percent CAPT proficiency.

Greenwich was by far the most expensive district in the peer group, outspending the next district by more than $43,000, yet they had the fourth-lowest CAPT proficiency in the DRG.

Colchester was the lowest-cost district in its peer group, but had average proficiency rates compared to the group.

In DRG G, a high concentration of costly schools means that the average adjusted ranking is 32.6, below the threshold for the most expensive third in the state.

The worst performing group, however, was DRG I, which contains the state’s five most expensive districts. These high costs fail to correspond with academic success. The group contains six of the 10 lowest average proficiency percentages and has an average graduation rate of only 64 percent.

Raising Hale has done similar rankings in 2010 and 2011, but the Department of Education changed the way it calculates graduation rates two years ago. Since there is a two-year lag in the data, this change is reflected for the first time this year.

For example, in 2011 only 10 schools were more than twice as efficient as Hartford schools. Under the new ranking, 41 schools are more efficient.

Hartford’s per-diploma cost increased by almost $50,000 because of the change. The average cost for a diploma statewide increased more than $10,000.

To calculate the cost per graduate, the Yankee Institute took data from the Connecticut Department of Education for average annual expenditures per student going back 13 years, representing K-12. After totaling the cost, it was divided by the graduation rate to come up with the lifetime cost per graduate. The 13th year is the 2009-2010 school year, and data is not adjusted for inflation, so the real cost of 2012 graduates is higher than calculated. Communities with high annual costs, more drop outs and lower graduation rates end up with the more expensive graduates. Some regional school districts, districts with less than 13 years of data, charter schools and other non-traditional schools were left out of the calculations to keep the data consistent for the greatest number of schools.

Also, the calculations do not include costs for school construction or teacher pensions, both of which are paid for by the state.

In the past, the graduation rate was a measurement of the percentage of students who entered their senior year in a particular school district and then graduated from that district in the spring. The 2012 data reflects a change to a new cohort graduation system.  According to the Connecticut Department of Education, this measurement reflects the percentage of students who enter a district as freshmen and then graduate four years later.

This change has led to some artificially high changes in graduation rates and rankings.  School districts disadvantaged by this new system are those that have many more students leave the district (due to transfer or drop-out rates) during all four years of high school. They include: Ansonia, Bristol, Coventry, Derby, East Haven, Groton, Manchester, New Milford, Shelton, Watertown and West Haven school districts.

A second deviation from previous measurements is in the measure of academic achievement. Last year, school performance was measured using the Global Report Card, which compared the average student in each district’s score on standardized tests to all other students in Connecticut.  However, more recent Global Report Card data is not available. Instead, the 2012 data uses the percentage of a school district’s students deemed at or above proficient in the standardized CAPT reading and math tests. The two percentages for CAPT Reading and CAPT Math were averaged to find an average, which was used to rank the districts statewide.  A lower ranking means higher scores, while higher rankings correspond to lower average scores.

Correction: A data entry error caused the graduation rates for New London, New Milford and Newington to be reported incorrectly. The relevant data for the three districts has been corrected, as has the ranking for all districts. Bridgeport was incorrectly identified as the fifth most expensive district. It ranks sixth. New London moves up to fifth.

Yankee Institute intern Zack Albert contributed to this article. He is a junior studying political science and economics at Fairfield University. He lives in Southington.

It is in the interest of the special interest…

“Never waste a good crisis” is a Hillary Clinton quote and while that was in reference to climate control and the cultivated panic over climate change presenting opportunities for political lobbies representing “green” industries whose objective is to exploit a cultivated sense of urgency, the paradigm isn’t any different here… use a perceived crisis as a means of cultivating support for ushering excessive spending on the premise that the only way a problem can be solved is to throw money at it.

God forbid that anyone even suggest that we stop to consider what the real problems are before dumping truck loads of money on the issue lest they be branded as heartless and not caring about the children- who in reality are being exploited by the real intended recipients of the LOOT- that being the special interests, teachers unions, and other entities that would spend most of the tax dollars on things other than what MIGHT make an incremental difference.

The root of the problem is most likely not financial but the social and familial environment a student is being brought up in. I’d wager that if the truth were known we’d discover the root of the political machinery an interest in perpetuating the sense of crisis as an easy way to manipulate a population that has proven itself to be easily led to advocating more and more spending for the sake of the children because what kind of heartless monster would stand in the way of an avalanche of dollars for the children?

You can’t have a full discussion of this subject without getting into partisanship/progressiveism. If those supporting the continued mindless pouring of money into urban schools wanted urban kids to learn, they would have found a way. Like David Horowitz, I can’t believe that this couldn’t have been solved, after 50 years of trying. All children can learn. In whose interest is it that urban kids not leararn?

So, if resources are “vastly different,” how do we explain students from poor urban schools who achieve academic success? Supportive family environment? Genetics? Teacher’s Pet? The simple fact (Murph) is that the taxpayers have been pouring obscene amounts of money into failing urban school systems for decades and the results are always the same. Always. But more and more money is always the answer? So by this logic, once we have parity in resources, that will magically transform poor urban kids into excellent students?

Here’s a clue. There are failing kids in rich towns too. All the shiny new white boards and fresh veggies won’t change urban dystopia one bit. You know what will? Good old fashioned accountability.

A stable home life and supportive community for the student can go a long way toward mitigating the costs of educating him or her. Murph alluded to this a bit in citing opportunities and resources available for students from affluent families that aren’t there for less fortunate students. I’d step outside the school of thought that has people advocating throwing good money after bad on the premise that doing so will fix an issue when common sense might say otherwise.

There may be good reason to increase education spending but would it not make sense to first compare the home/community environments of students from different areas and seek ways of mitigating the economic stress that magnifies home instability that may well add some distraction to a mind that ought to be spending its energy learning to read and write in order to grow into a self supporting adult instead of an assistance-dependent person who is stuck in circumstances that foster continued instability for the next generation?

The interpretation of your figures as relative “efficiency” is bogus because the tasks you are comparing are quite different. You might want to visit the CCJEF website and download some of their research regarding the differential costs of educating the children of affluent families (Madison) compared to children from poor families (New Haven).

Affluent parents provide substantial learning opportunities to their children outside of classrooms that simply aren’t available to children whose families lack the resources required. Whatever the numbers say, it only takes a brief visit to school buildings in Hartford versus Madison or Tolland to observe that the resources available to children in those schools is vastly different.

Sadly, our failure to adequately invest in providing education for children from poor families tends to result in adults who will require some levels of public support for the rest of their lives rather than taxpayers. The difference adds up to millions of dollars per child over time. Changing this equation isn’t rocket science. We know how to do it, we simply fail to act accordingly.