On Wednesday President Obama will travel to Central Connecticut State University in New Britain to give a speech advocating for an increase in the federal minimum wage to $10.10 per hour. He will be joined by the governors of MA, VT, RI and of course CT.

Last week Governor Malloy scored brownie points with the administration when he defended Obama’s minimum wage push at the National Governors Association meeting. Malloy has consistently been an active mouthpiece for all Obama administration policies; many have attributed this to higher aspirations of serving in the Obama cabinet. Unfortunately for CT the President did not see fit to appoint Malloy to his cabinet. However, for loyalty to the regime, the President has decided to reward Malloy with two trips to CT in less than a year. Last April Obama kicked off his gun reform initiative at the University of Hartford.

The President and Malloy will be in good company (or bad depending on how you look at it) at Wednesday’s meeting of the minds in that all of these leaders preside over poorly performing economies. Governors Chafee, Patrick and Shumlin state’s rank 44th, 45th and 36th respectively on the American Legislation Exchange Council’s ranking of overall economic performance. Malloy’s CT ranks 46th and Obama’s America continues to go through its slowest economic recovery in history. These hardly seem like the men we should be taking economic advice 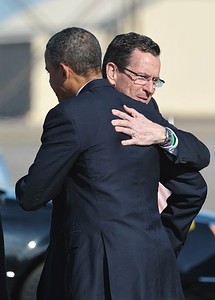 While my professors and peers at CCSU dream of what they will say to their political idol should they get the chance, the rest of us are left with the harsh realities of Obama’s policies. Instead of dedicating their efforts to creating friendly business climates with good paying jobs these leaders center their attention on legislation that, according to the CBO, will kill 500,000 jobs. In reality less than five percent of workers make minimum wage and most of them are teenagers. These leaders claim that raising the minimum wage will bring thousands out of poverty, but in reality businesses will be forced to shed non essential employees or raise their prices.

If this exponential increase goes into effect businesses will now have to adjust for an increase in payroll spending on top of an increase in healthcare spending (thanks to the ACA). How do these politicians, who create nothing except burdensome regulations, expect businesses to survive? Where do the students who overwhelmingly support these politicians expect to find good paying jobs? Not in the stagnant economies of these states.

Meanwhile everyone turns a blind eye to the real winner in this situation, big labor. Labor unions have always underwritten the minimum wage raise movement simply because their members stand to make gains as the prevailing wage rises in concert.

Here’s the bottom line; no matter good an increase in everybody’s wages may sound, if it is inorganic and not tied to a real increase in value then in the end nobody wins.

Thankfully last time the President kicked off a legislative initiative in Connecticut it failed at the federal level. Despite the President’s attempt to use Sandy Hook victims as political leverage at UHART, federal gun reform effectively went nowhere in Congress. Hopefully this is a good omen.