Anyone who watched Tuesday’s State of the Union address may have noticed a colorfully clad Rosa Delauro (D-3rd District) jumping for joy and high fiving fellow lawmakers at a particular point in the President’s speech.

What inspired her gleeful reaction was Obama’s attack on the 77 cent apparent wage gap between men and women. This “equal pay for equal work” argument is one of the keystone issues to which politicians pander in order to secure the female vote.

However for anyone who cares about economic reality as opposed to myth, this portion of the speech and Delauro’s overreaction, are riddled with fallacy and hypocrisy.

It has been well documented that Delauro is one of wealthiest members of Congress. Before the 2008 recession Rosa posted a net worth of around 5.6 million dollars, making her the wealthiest CT Congressional delegate at the time. In the post rescission years while millions of families have taken a pay cut and experienced extreme financial hardship, Delauro has managed to more than triple her net worth to around 17 million dollars, and some claim that she may be worth up to 26 million. Needless to say it does not appear that Delauro is suffering from any kind of pay discrimination.

Delauro’s asset portfolio far exceeds that of the average member of Congress and even she is dwarfed by fellow liberal delegates such as Richard Blumenthal, Nancy Pelosi and Diane Feinstein.

To be fair it is not that these liberal elites have been able to accumulate such wealth that is our cause for discontent. There are plenty of Republican members who fill the ranks of Congress’s top earners and one should be proud of his or her own successes (if earned in a reputable fashion).

Our discontent arises from the hypocritical redistributionist philosophies held by these liberals who have conveniently accumulated a significant amount of wealth for themselves and have no intention of giving it away. On the one hand they accuse high earners in the private sector of not doing their “fair share” and “cheating,” while on the other hand they benefit equally from occupying public positions from which they point the finger.

With that said let us turn to the issue for which Delauro was applauding, the economic fallacy that a woman is paid less than a man. This myth is constantly perpetuated by 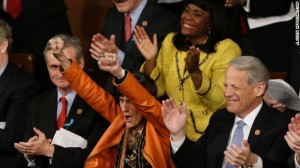 those in the media and academia who have allowed it to become a coveted it a dogma of the Left.

This myth was dispelled by Thomas Sowell in the early 1970s, yet his research has conveniently gone unnoticed. This simple break down of the myth goes like this:

When the incomes of men and women are averaged as a whole it is true that the aggregate of men make more than the aggregate of women. However if you break the data down to a case by case comparison one finds that it is the life choices of men and women that account for the differences. Women often do not have as much vested time in a job due to an important biological necessity, raising children. Also women often do not pursue the same disciplines as men, who have up until now dominated the high paying high skilled jobs in the fields of science, technology and finance and are often more prone to negotiate for higher wages.

Sowell’s 1971 findings have been quantified time and again by contemporary sources such as Forbes, Real Clear Markets and Sowell himself. Real Clear Markets notes that highly acclaimed author Marty Nemko found in a 2010 review of Census Bureau data that:

“…  in a study of single childless urban workers between the ages of 22 and 30, Reach Advisors found that women earned an average of 8% more than their male counterparts. And according to the Labor Department, “of men and women who work 30 to 34 hours a week, women make more, 109 percent of men’s earnings.”

It is apparent that when the data is broken down categorically it is the life style differences between men and women not an inherent gender bias that accounts for discrepancies in overall pay between the two sexes.

Next time you hear the “equal pay for equal work” argument ask yourself if the one bringing the charge in fact holds the same job, has the same amount of relevant education, has the same amount of vested time in that job and has the same work experience. If the answer is yes to all of the above, and there is a discrepancy in pay, then and only then may there be a case for gender bias in the work place. As of now such a bias would be the exception not the rule.