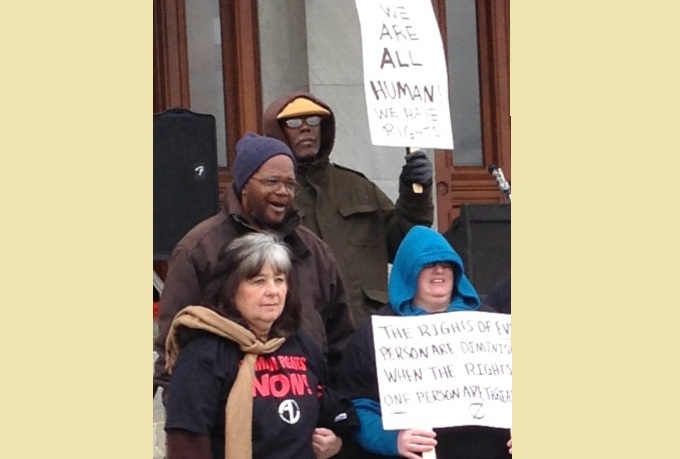 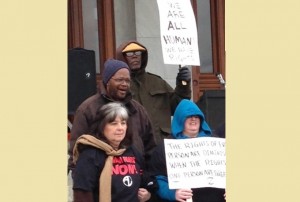 For all the talk about the importance of addressing Connecticut’s mental health crisis, much local reporting has catered to one side of the issue – the side without personal stakes in the game.

Advocacy Unlimited held a human rights rally on the steps of the Capitol Saturday. Dozens attended, uniting in solidarity and chanting about the importance of their rights – but only one reporter heard their cries.

Speakers discussed their personal experiences of falling through a mental health system that often prioritizes medication over understanding. The opening speaker recalled witnessing his mother restrained and assaulted in psychiatric hospitals while he was a child and later witnessing her lose opportunities because of her mental illness.

“I watched her work so hard and go to school for so long to get a job that she was so proud to get and get fired in an instant because her diagnosis was revealed to her employer,” said Deron Drumm, director of Recovery University at Advocacy Unlimited. “I struggled with my emotional stress for so long and I was so afraid to ask for help because I was so afraid that they would tie me to gurneys and treat me like they treated my mom.”

Both Drumm and his mother, Karen Kangas, have testified at legislative hearings that address mental illness.

“I think about how many times we are guilty by association,” said Kangas, executive director of Advocacy Unlimited. “We don’t want to be punished for the acts of one person; we want to make it better for all of us.”

With chants like, “Hey, hey, ho, ho, forced psychiatry’s got to go,” the crowd was reminded not to give up the fight.

“Forced treatment does not work,” said George Badillo, an activist and peer trainer for People, Inc. “It doesn’t get anywhere. It just gets people not seeking treatment – the ones that want to.”

Badillo was committed to a New York state institution for nearly three years.

Connecticut media have focused on minutiae surrounding Newtown shooter Adam Lanza, outrage over a nursing home for mentally-ill inmates in a residential neighborhood, and on the many press conferences aimed at addressing the problem.

Many agree that Connecticut is battling a mental health crisis, but rally attendees question whether the answer lies in stripping away rights. Among the proposals opposed by AU is a bill that would require psychiatric screening.

S.B 374, which was introduced by New Haven legislators Sen. Toni Harp and Rep. Toni Walker, both Democrats, calls for public school children and teenagers in grades 6, 8, 10 and 12 and home schooled children ages 12, 14 and 17 to “have a confidential behavioral health assessment.”

Critics question whether results would actually be confidential.

“It’s outrageous that state officials could come into private homes and potentially remove children if they are assessed as a threat as a result of the investigation,” Dee Black, senior counsel for the Home School Legal Defense Association, told World Net Daily. “Regardless of what state officials claim, I don’t believe the results [of the investigations] will be held confidential.”

The bill is planned for discussion at a public health committee hearing 11 a.m. Friday, March 8, at Wesleyan University.