Crowd shows up to support expanded availability of licenses 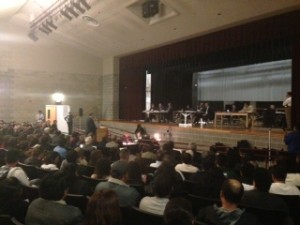 Thousands of residents attended a transportation committee hearing at Wilbur Cross High School in New Haven on Monday, March 4, in support of bills expanding the rights of immigrants and migrant workers.

Current law only allows licenses to be issued to individuals with a Social Security number. S.B 68 would allow state residents to obtain commercial and non-commercial licenses and register their vehicles regardless of immigration status. H.B 6037 has similar aims.

The large auditorium was standing room only, those unable to get a seat gathered in the cafeteria, where the hearing was broadcast over loudspeaker.

“If this bill passes it would be good for all the community, not just Hispanics, not just Americans, but all immigrants from any country,” said Gisela Calahorrano, member of Sacred Heart Church in Waterbury. “Everyone could be identified and we could pay taxes and register our vehicles.”

Calahorrano organized a group of fellow church goers to distribute English and Spanish copies of the hearing testimonies.

“It’s for a great cause,” said Rosa Maria Gonzalez, a fellow church member. “It will help many immigrants and we shall be all equal regardless of anything.”

Community response to this legislation was so strong that the local fire marshal got involved due to the overcapacity. Cars were even double parked, blocking in school employees trying to get home. Officers at the scene first blocked the entrance and then began letting people in about 50 at a time.

Legislators argued that passing the legislation would benefit the state due to increased tax revenue and benefit insurance companies, giving them access to a previously untapped consumer market.

“Right behind me, a lot of these folks are active and productive citizens in our community,” said Rep. Victor Cuevas, D-Waterbury.  “They contribute every day to our local economy.”

Rep. Cuevas illustrated the importance of the legislation by recalling the story of one of his constituents, an immigrant slapped with a four year jail sentence after accidentally hitting and injuring another driver after hitting an ice patch on the road.

“His family lost a father, the victim had knee surgery and she had to retire. These are the telling stories of what we are trying to say,” said Rep. Cuevas.

The scenario would have been much different if the law had allowed this worker to carry a license and car insurance.

“We have to stop being reactive and we have to start being proactive,” said Rep. Cuevas.

Supporters argued that S.B 68 would increase public safety. Undocumented individuals struggle with the inability to call police when help is needed, for fear of deportation.

New Haven Mayor John DeStefano tackled this issue in 2007 by issuing Elm City resident ID cards. Approximately 10,000 have been issued since. Despite subsequent threats and hate mail, he strongly stands behind the project. “Immigration has always been a powerful factor in wealth creation and job growth in the city of New Haven,” he said.

If passed, the bills discussed Monday evening would go further to provide a sense of safety for these individuals.

“Many organizations have been working on this for around three years,” said Uswaldo Cuapio, East Haven resident and member of Congregations Organized for a New Connecticut, or, CONECT. “We work toward a common good and little by little we’ve been able to meet and support each other in making this possible.”