Conn. teachers unions getting a political return on investments 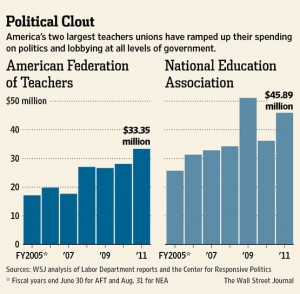 According to the Wall Street Journal, the two largest teachers unions spent $330 million on politics and peddling influence between 2007 and 2011.

“Some of the spending that the two teachers unions identified to the Labor Department as ‘political and lobbying’ activities from fiscal 2007 through fiscal 2011 went to election consultants, voter mobilization and advertising,” Journal reporter Alicia Mundy wrote. “Additional millions went to PACs that donate almost entirely to Democratic candidates and committees.”

These contributions are strategic in nature, as they forge close ties between the union, the Democratic political machine and affiliated progressive causes, thereby extending the political clout of the unions.

The end result is a codependent relationship between teachers unions and Democrats, with unions working vigorously to keep Democrats in power through large donations. In return, the unions are granted generous benefits from those they help keep in power.

The story is no different in Connecticut where one analysis found 92.5 percent of political contributions given by teachers unions went to the Democratic Party and its candidates.

The power of teachers unions in Connecticut was exemplified earlier this year as Gov. Dannel Malloy attempted to reform the education system and was met with severe pushback from the unions. In turn, soft reform was passed while many of the initiatives championed as fundamental to change were tabled.

Just months after his confrontation with the teachers unions over tenure reform, Malloy announced Sharon Palmer, an AFT Connecticut leader and communist-award winner, would serve as his new labor commissioner.

Last week, Palmer sent an email to AFT members asking them to wear red in solidarity with striking Chicago teachers. The strike in Chicago is another piece of evidence showing the inability of teachers unions to accept reforms even when it is their Democratic allies proposing them.

Kelly Delaney is an intern at the Yankee Institute. She is currently working toward a doctorate in political science with a concentration in American politics and international relations from the University of Connecticut. She lives in West Hartford.