Why doesn’t Connecticut have a top 100 high school?

Although Connecticut has often been commended for its educational achievements, a recent study by Newsweek and the Daily Beast didn’t rank a single Connecticut school in the top 100 schools nationally.

The study aimed to rank schools based on their “Newsweek Score,” a number determined by analysis of six key performance indicators:

Using these indicators, the study found that The Gatton Academy of Mathematics and Science in Bowling Green, Kentucky, is the top school in the nation.

Gatton achieved the top ranking through incredible 100 percent graduation and college matriculation rates, as well as almost five Advanced Placement tests taken per student and average SAT and ACT scores of 2010 and 31.2, respectively.

The first Connecticut school, Weston, does not make an appearance on the list until slot 163. Of the 1,000 schools listed, Connecticut hosts only 24 of them.

An abridged list of the 1,000 schools can be seen below, with all Connecticut schools included: 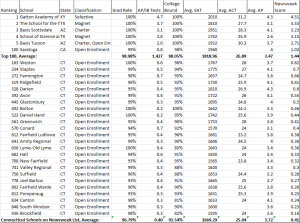 Where the real differences are apparent, and where Connecticut fairs poorly in the study, is the section of criteria which could be regarded as the “future success” area. Connecticut schools have fewer students who are graduating and striving for college matriculation then the top schools in the nation.

This fact is reflected in the average number of AP tests per student (only 0.4 for Connecticut’s best schools, as opposed to 1.4 for the top 100 schools) as well as lower graduation rates and much lower college matriculation rate (only 91.5% compared to 98%).

What these numbers point out is the fact that, in Connecticut, the students who do well do very well (see the average AP scores), while others are often left behind on a relative scale. Because the study places an overwhelming amount of weight on graduation and matriculation rates (these values made up 50% of the final Newsweek Score), the success of the many is diluted by shortcomings of the few, at least as measured by Newsweek. In this case, the few is often the 2 to 3 percent who fail to graduate.

So, the problem for Connecticut is not a lack of success, but a lack of equitable success.

A final interesting point reflected in this study is the fact that the majority of the top 100 schools are not “open enrollment” schools, but rather magnet or charter schools. All of the Connecticut schools on the list are “Open Enrollment” institutions, which probably has an impact on their final Newsweek Score.

Zack Albert was a summer intern at the Yankee Institute. He is a junior studying political science and economics at Fairfield University. He lives in Southington.