Gov. Dannel Malloy cancelled plans to provide $300,000 in borrowed state money to a New Haven nonprofit with links to the Communist Party USA after military veterans shared their opposition.

Previously, members of the Malloy administration had made comments supportive of the funding for the New Haven People’s Center, including senior advisor Roy Occhiogrosso and Office of Policy and Management Secretary Ben Barnes.

“I am particularly concerned about the opposition of veterans groups and want to take that into consideration,” Malloy said Monday at a meeting of the State Bond Commission when he announced the funding would not be considered. “So therefore I decided that we should not go forward with this project.”

“There are some important activities that occur at this building,” Malloy said. “I don’t deny that. But at this time they should find other ways to support this project.”

The administration received its first warning about the project from a retired state employee who previously oversaw grant funding from the Department of Social Services.

If Malloy allowed the commission to approve the funding, it would have come from DSS.

Veterans, bikers and Republican politicians met at the New Haven People’s Center Friday for a demonstration against the funding, as reported by the New Haven Independent:

Veterans hospitals deserve government money more than Communists do, declared Mike Rogalsky, who served in an Army hospital evacuation unit in Vung Tao, Vietnam, in 1968. He called Malloy’s support for the People’s Center a “total disrespect to any and all veterans who have fought” Communism.

Another Vietnam vet, former Marine Rick DePinto…occupied the People’s Center’s steps with his buddies from Waterbury’s Rat Pack while the formal speeches took place on the sidewalk. Afterward he offered a more succinct take on the $300,000 bonding request: “It sucks.”

Video of the protest 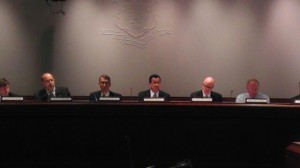 Gov. Malloy chairs a meeting of the State Bond Commission.

“I saw the opposition of veterans. I ran into some veterans last weekend as well as reading coverage of their opposition,” Malloy said after the commission meeting. “This clearly has become an emotional issue.”

“I’m concerned about the amount of controversy that this has caused particularly for them, with respect to those individuals who have served this nation in the armed services,” he explained.

Malloy said the People’s Center is a “viable” and “legally constituted” nonprofit, but “because of the amount of opposition and hurt that this has engendered, I thought it was appropriate to move on.”

He said the controversy stemmed from the “fully legal ties of some of the individuals to the Communist party.”

“But ultimately what that represents to people who served in various conflicts, you know, became a concern,” Malloy said.

Sen. Len Suzio, R-Meriden, who spoke at the demonstration, congratulated veterans Monday on their ability to change policy.

“To the scores of taxpayers – especially the many veterans groups – who spoke out against this bond item: Congratulations,” Suzio said in a statement. “Your voices were heard.”

I see our brave men and women in uniform don’t stop fighting for our freedom once they’ve returned and donned civilian attire.. Gotta begrudge a little credit to Malloy for doing the right thing and backing down – albeit under some pressure.

MANY THANKS to all veterans and those who stood with them. We are grateful always to your commitment to us and our Country. God Bless.

Hooray! Democracy prevails over the commie freeloaders and parasites. It always does. Thank you Tom Scott, thank you veterans, thank you CT Law Tribune columnist Karen Torre, thank you Journal Inquirer Editor Chris Powell, thank you GOP state reps and senators who came out, thanks to all decent Americans who worked to stop this communist theft of vetarans’ and other’s hard-earned tax dollars (in comparison to commies, who hardly ever work, never mind contribute to the state treasury)!