Malloy Slams Jindal for Exposing the Emperor with no Clothes

In the aftermath of the now highly publicized showdown between Louisiana Governor Bobby Jindal and Connecticut’s Dannel P. Malloy at the National Governors Association meeting, pundits on both sides have been scrambling to analyze which governor gained the upper hand. However you value the contextual validity of each man’s argument there is one fact that became blaringly apparent at that podium on the White House lawn; no way was Malloy going to let Jindal show that the emperor has no clothes.

Jindal noted that after five years under Obama the economy has now become oriented around minimum wage, and then challenged the United States to strive for more. He then offered a number of suggestions to alleviate our woes, such as authorizing the Keystone pipeline and loosening regulations. 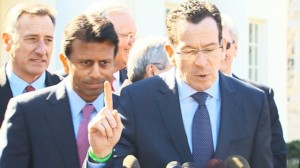 Jindal could finish speaking Malloy swooped in to defend the Democrat minimum wage agenda by inarticulately accusing Jindal of inappropriately inserting “partisan politics” into the mix. Since then many left leaning news outlets have accused Jindal of “breaching protocol” at the RGA event.

To the inquisitive observer this accusation may appear a bit hypocritical. When you really look at it, hasn’t Malloy’s party been the vanguard of partisan divisiveness? After all, it was Democrats who developed a healthcare law behind closed doors that not one Republican in the House voted for. It was Democrats who wouldn’t budge on any budget cuts and eventually initiated a demagogued partial government shutdown. It was the leader of the Democrats, President Barak Obama, who told the American people that he will push forward with the Democrat agenda by hook or by crook, and then told a visiting Francois Hollande that he has the privilege of breaking protocol and doing whatever he wants. Hardly sounds like the epitome of pragmatism.

Why then should Republicans be held to some higher standard of bi-partisanship? The President and his allies –Dan Malloy being one of the closest- have taken every opportunity to slight and defame the Republican agenda. Republicans have unjustly been called racists, homophobes, Islamaphobes, anti-poor, anti-working etc. for years now. Yet when Bobby Jindal, who holds a leadership position in the Republican Governors Association, offers some legitimate concerns and possible solutions he is bullied for “breaking protocol.”

Malloy would have none of it. How dare an opposition leader break protocol and criticize a President who brags about breaking protocol? In Malloy and Obama’s world the opposition is shouted down and defamed for trying to voice its concerns. Is that not why Obama attempted to send FCC police into news rooms and television stations across the land?

Jindal’s rant against increased minimum wage was founded in concerns known to all who study its effects and instead of addressing these concerns the Left has dubbed Jindal as a blabbering jerk. Meanwhile the CBO has estimated that an increase in the federal minimum wage would result in the loss of half a million jobs. With unemployment being American’s top priority shouldn’t we cheer on someone who will challenge the regime on these issues, or have Republicans been relegated to a  content minority?

As this country continues to struggle economically and the fallacies and lies of this administration’s agenda are continually exposed, Malloy and the Democrats have taken on an obvious mission; protect the movement, protect the king.