Hartford moves ahead on $100 million renovation of half-empty school 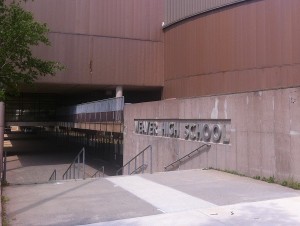 State officials recently approved borrowing $80 million to renovate Weaver High School, with Hartford picking up the tab for another $20 million, even though three-quarters of its desks are empty.

Those students attended the Hartford Journalism and Media Academy and the Culinary Arts Academy. But with the Journalism Academy heading to a new building for the 2013-14 school year fewer than 300 students would remain at the school.

In its plans for Weaver, the district says it will renovate the school back to “like-new condition” for an estimated 1,350 students in three themed academies – the Academy of Hospitality and Tourism, which will replace the Culinary Academy, the Arts and Sciences Academy at Weaver High School, and the Academy of Architecture and Urban Design.

The plans call for the school to be “heavily renovated,” including new classroom space, a new gymnasium, and the removal of the pool and associated areas. The final square footage of the new building will be about 243,675 square feet.

With enrollments dwindling, some had called for Weaver to be closed. But the community rallied to keep the school open.

The Weaver renovation is part of Hartford’s move toward smaller, themed academies over large public schools. The state has spent a significant amount of money in the past few years building or leasing space for the academies across Hartford.

Test scores, while still well below state averages, have crept up over the past few years.

Hartford School District has more money to spend than many of the other school districts in the state because many of its students head out of the city to schools in the region, but the district is still paid for their education.

According to State Department of Education statistics, 4,703 Hartford children attended either a charter school or a school in another district in 2011, but Hartford was still paid for those children by the state.

Suzanne Bates was a 2013 fellow at the Yankee Institute. She lives in South Windsor.