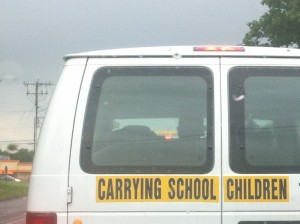 If you happen to be driving across Hartford around the time school lets out you may find yourself behind a full-size passenger van with a bright yellow sign that says “Carrying School Children” emblazoned on the back.

Many of these vans are carrying children to and from the 18 magnet schools in the greater Hartford area that are part of the Capital Region Education Council (CREC) school system.

Transporting children across the 200 square miles included in CREC’s boundaries is expensive – CREC spends double or triple on transportation compared to other school districts in the state.

Children ages 3 to 18 from 35 school districts in the Hartford area can apply to a CREC school, with students placed by lottery. Each school is based on a theme ranging from the arts to engineering, and test scores at the schools are comparatively strong.

But the current system of placing a child in a school regardless of how far away he or she lives is costly.

For the 2012-13 school year, CREC got $16.5 million from the state for transportation. According to its website, CREC transports around 10,000 students to and from school, which means it spends about $1,650 per child on transportation.

That includes payments to parents of three and four year olds living in suburban districts who are attending CREC preschool programs. They receive $5 a day to drive their children to and from school.

Repeated calls and emails to the State Department of Education for comment on CREC transportation costs were not returned.

Boston School District has instituted a zoning system in its school choice program to give children choice, but also keep them closer to home. They recently moved from a three-zone model to a ten-zone model to lower transportation costs and traveling time.

Suzanne Bates was a 2013 fellow at the Yankee Institute. She lives in South Windsor. Her daughter attended a CREC magnet school during the 2012-13 school year.