The three month deadline for the CT General Assembly to pass gun legislation in the wake of Sandy Hook has come and gone. Legislators are now facing pressure to hastily produce any type of strong legislation regarding guns.

In the aftermath of Sandy Hook tragedy many citizens have called upon the Government to “do something.” To create not just swift but effective legislation, a bipartisan working group was formed to research fair and effective methods to prevent gun violence.

The effort has now come under scrutiny from many including our two US Senators who feel that the states slow response is a “tragedy”. On Monday Senators Richard Blumenthal and Chris Murphy displayed their angst in a local press conference.

Blumenthal worried that the two 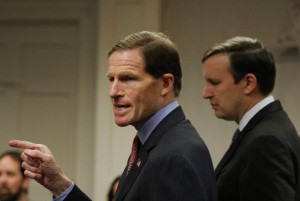 would have to go to the Senate empty handed and lobby for federal legislation sparked by events in their own state saying that “Connecticut’s failure to act in the next two weeks will be a detriment when we go to the floor”.

Murphy spoke more about targeting specific items that he feels need to be banned, saying that if “we don’t pass a ban on high-capacity ammunition, then the height of irony in the wake of Newtown would be that Connecticut would become the epicenter of sales for the very type of ammunition that lead to that tragedy.”

Presumably the good senator was talking about high capacity magazines because high capacity ammunition does not exist. It’s been over 100 days since the tragedy and some law makers still have not taken the time to familiarize themselves with that which they wish to ban.

The two both agreed that the issue can only really be solved at the federal level and that laws Connecticut might pass would not necessarily make the state any safer, but that it needs to hurry up and pass them anyway.

The group Connecticut against Gun Violence recently said that the attempt at bipartisanship was “honest” but that “it has turned out to be a bad idea.”

Thankfully there are some leaders in our state who are committed to a sensible bipartisan effort. House Speaker Brendan Sharkey called legislators “wise to take the time and get their legislation right.”

New York saw the need to act hastily on this issue and in early January passed the SAFE act limiting the rounds per magazine to a maximum of seven among other things. At the time Governor Andrew Cuomo bragged about passing the most effective law in the country. Since then Governor Cuomo has said that parts of the law are unworkable and admitted that “there is no such thing as a seven bullet magazine.”

Colorado then threw its hat in the ring passing a law that would ban magazines in excess of 15 rounds and expand background checks. Many of the state’s Sheriffs are voicing opposition claiming that the laws are “impossible to carry out because they’re poorly written and don’t clearly define the elements of a crime.”

After seeing two states pass sloppy, under researched laws one would think that there would be support for a bipartisan effort to get this right. If the debate were one sided it is possible that the Assembly would have already enacted radical laws such as Senator Ed Meyer’s one round maximum capacity rule.

The theory that stricter gun laws prevent violence is far from empirically sound, but that won’t stop politicians from invoking the names of Newtown victims to further their political agenda. They know that their propositions can’t stand at face value so they exploit the names of the slain and tell the public that we must “do something for them.”

Meanwhile in Newtown there has been a spike in gun permit applications.