Interestingly enough what seemed to be an innocent protest against yet another Connecticut price hike has a suspicious ideological under belly.

The rally was organized by the CCSU Student Government’s President, without a vote from the senate, in collaboration with the group Students of the Universities for Democracy. SUD was founded by Danny Ravizza, a registered lobbyist who works as an organizer for the ultra-Progressive Connecticut Citizens Action Group.

With CCSU’s endorsement Ravizza has enjoyed free advertising space for SUD paid for by the University’s students, and a platform to push the views for which he lobbies at the Capitol. The Eastern and Southern Connecticut State Universities have yet to endorse the movement.

CCAG was founded in the 70’s by Ralph Nader and has championed from the far left causes like nationalized health care and union protectionism. In recent years CCAG has been involved with the Occupy movement and in 2011 members (including Ravizza) were arrested for sitting on I 84 during rush hour in a Union sponsored protest against economic inequality.

What interest does a high profile progressive lobbying firm have in the Connecticut State Universities tuition rates?

Perhaps the answer can be seen on the signs protesters carried which covered various topics from the Afghanistan war to the Occupy movement, showing their obvious commitment to sensible educational reform. 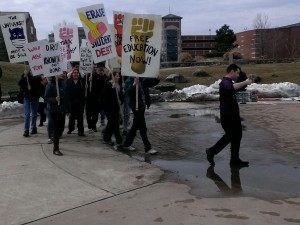 One of the more popular signs displayed the infamous Socialist solidarity fist and demanded free education. There is little doubt that a faction the of protestors, some of whom are not current students, believe that like healthcare education is too much of a personal burden to pay for, and wish to push the responsibility onto someone else.

Another answer could possibly prove collusion between the professors union (CSU-AAUP) and CCAG.

The AAUP and CCAG have collaborated in the past, the former paying the latter for advertising space and also hosting a speaker at an event who had represented CCAG.

Why would the Professors Union want their students to protest? The movement against tuition hikes has put blame on the Board of Regents for cutting Educational Spending and would pressure it to return or increase funding.

The protest also creates a diversion to the 5 percent pay increase the AAUP has negotiated with the State and its members are due to receive. While students worry about a 3 to 5 percent tuition raise the increased padding in the pockets of their beloved professors goes un-noticed.

With accusations and blame being put on the Governor and Board of Regents, the real problem is going unnoticed and the wrong questions are being asked. Rather than asking why pay more for education students should ask why it costs so much for education.

The professors are getting a raise no matter what, whether it is on the backs of students or the backs of tax payers is arbitrary to the AAUP.

While students are understandably upset with the increase in tuition, one should always be careful about who you make bedfellows with. A registered lobbyist going undercover and secretly colluding with students without a vote from their governing body should raise some eyebrows. Especially a lobbyist who lays in traffic.