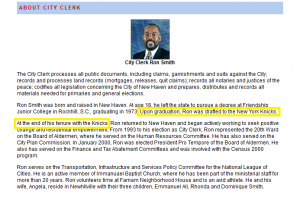 An image of New Haven City Clerk Ron Smith’s official biography containing the error that he was drafted by the New York Knicks.

New Haven City Clerk Ron Smith was not drafted by the New York Knicks, and he never played for the team, contrary to his official biography on the city’s website.

Smith said he didn’t know how the error entered his biography.

“Somebody made a big blunder,” he said. “I’ve been trying to get it straightened out.”

Smith said he never played for the team and wasn’t drafted, but rather tried out twice.

“The commissioner opened the door for me,” he said. “I went back twice but I didn’t make it.”

“Upon graduation, Ron was drafted to the New York Knicks,” the biography on the New Haven website says. “At the end of his tenure with the Knicks, Ron returned to New Haven and began actively working to seek positive change and residential empowerment.”

Smith said he fulfilled his dream by trying out for the team. “At least I had an opportunity,” he said. “Not once, but twice.”

“It was a great disappointment, but I was there,” Smith said. “I wish I made it, man. I wouldn’t have to work every day.”

“I’m definitely going to get that straightened out.”