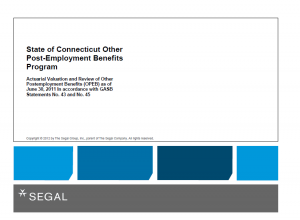 Connecticut taxpayers owe $2.1 billion less for state retiree healthcare, according to a new report released Thursday, because actuaries changed one number used to calculate the long-term cost of the benefit.

According to the Segal Company in Farmington, taxpayers were on track to owe present and future retirees $31.2 billion in other post-employment benefits as of this year.

A draft report last month showed that number fell to $20 billion, largely because of changes in assumptions and participation in a new program that has accounting advantages over the previous method of delivering prescription drugs to retirees on Medicare.

One of the major assumption changes in the draft report was an increase in the discount rate from 4.5 percent to 5 percent.

In the final version of the report, the actuaries increased the discount rate again – at the state’s request – this time to 5.7 percent. This simple change of .7 percent reduces the stated cost of the benefits by $2.1 billion.

The discount rate is important because it puts a price on time. The higher your discount rate, the more you prefer to have money today over tomorrow.

Put another way, the discount rate is the amount of money you would give up to have a dollar owed to you next year paid today.

The state is increasing its discount rate because of accounting rules often criticized by financial economists that allow it to use a discount rate based on expected investment returns.

Financial economists say the discount rate should be much lower – specifically what is known as the risk-free rate – if the liability has to be paid.

Higher rates of return – and higher discount rates – imply taking on more risk to obtain such returns and shouldn’t be used for guaranteed payments, the argument goes.

Gov. M. Jodi Rell and the State Employees Bargaining Agent Coalition agreed in 2009 to start saving for OPEB costs in a trust fund.

Although the trust fund currently contains about $49.6 million – or one-four-hundredth the long-term healthcare liability – the state is counting on returns from investing this relatively tiny amount to justify increasing the discount rate.

The state expects to earn 8.25 percent on its investments in the trust. The actuaries determined 5.7 percent represents a blend between the 8.25 percent discount on liabilities with offsetting assets and 4.5 percent for other liabilities.

As recently as a year ago their discount rates were higher than 5 percent, but private companies are legally required to fully fund their pensions unlike state governments.

Announcing the completion of the report, Gov. Dannel Malloy and Comptroller Kevin Lembo celebrated its findings.

“Today’s announcement is further proof that the tough decisions we’re making are having a real impact on our state’s finances,” Malloy said. “By planning for the long term, we can make sure that future generations won’t find themselves in a situation where they have to choose between critically important services and obligations to state employees.”

“This future savings is extraordinary, resulting from partnership among state agencies and state unions in controlling costs, while maintaining quality services,” Lembo said. “This report reveals that creativity and collaboration, all accomplished in remarkably short time, will save us billions. This is a powerful incentive to continue these efforts to reduce costs for Connecticut.”

The joint release from Lembo and Malloy described the savings differently than actuaries did in their report.

Lembo and Malloy said the $2.12 billion reduction “is due to recently negotiated increases in employee and state contributions, which are expected to accumulate rapidly under this new arrangement.”

According to the actuaries,

A ten-year projection of the OPEB Trust Fund was completed to study whether the discount rate used to value plan obligations could be further increased. Based on our analysis presented in our memo dated May 10, 2012, the State decided to increase the interest rate to 5.7%, which lowered the obligation by an additional $2.12 billion.

Since the report was long overdue, the state had to use stale numbers in its Comprehensive Annual Financial Report, as it did for the two years before that, prompting auditors to mark the reports incomplete.

Under proposed new accounting rules, the state will soon have to add its retiree healthcare liability to its balance sheet instead of reporting it in footnotes.

According to the actuaries, recent retiree healthcare costs came in lower than expected allowing them to reduce future estimates.

The actuaries also changed the prediction for medical inflation from previous reports. At its peak difference from previous estimates three decades from now, the new inflation rate saves the state about 8.5 percent.

Lembo’s adoption of a new method of delivering Medicare prescription drug benefits has accounting advantages that allow the actuaries to use future federal subsidies to decrease the liability on Connecticut’s books.

Using words like “failure” implies that there was some attempt. I am convinced that it is refusal… the “sacrifices” were just press-release friendly deceptions to lull what are clearly seen as pathetic sheep into being more docile in getting porked with the largest tax increase in state history- including increasing the income tax retroactively. Nothing this gubernatorial administration or the yes-men rubber stamp legislature does shows any real concern for the working class. Punitive taxes and mandates on small businesses are job killing- yet this governor would have us celebrate his supposed record of job creation by fawning over the phantom jobs created at Jackson Labs- at an expense of nearly $1 million per position to the Connecticut taxpayer. Oh, and those shiny new jobs will probably be filled by folks either already employ+ed at UCONN, the Health Center, or brought in from out of state.

I suppose we should all feel better about it because we can now legally overpay for alcohol in Sundays and holidays. The contempt that Malloy really seems to harbor for the regular guy is almost palpable. He is beholding mainly to the unions- as evidenced by the forced unionization via illegal executive order of PCAs and home daycare providers. I’m going to postulate that the union dues will be deducted from state subsidies given to the providers as most of them do not work for a paycheck-cutting employer which itself highlights the complete lack of necessity for any sort of collective bargaining representation.

It was a money grab- the tactics to bring it about themselves reflect the extraordinary likelihood that not only did this governor know what he was doing but he also knew that the unionization was not wanted. It’s time to start looking at government less as an institution composed of elected representatives of the people and more as the criminal mafia style racketeers that they are.

When they experience a huge increase in revenue flow via punitive tax run-ups when they’ve been making loud lip service to belt tightening and consolidation yet still come up $200 million short and they attribute that to lower than expected tax revenue then something is a bit more than a little rotten in Denmark.

John Rowland was hung out to dry- serving prison time for having state contractor work done on his personal home- and nothing is done to the the current thug who is systematically choking out the middle class while delivering less than zero on his supposed priority on job creation- all the while making naked money and power grabs for his buddies in public sector unions- including effectively endorsing a campaign of harassment by organizers who were shipped in from other states (tells you something of the real support in THIS state!) in order to coerce private service providers into joining a union that they are in zero position to benefit from.

I’m sure the work on Rowland’s Litchfield vacation home didn’t cost Connecticut taxpayers billions of dollars. The press seems to be unwilling to be the least bit critical of King Malloy as he tramples the state constitution — akin to Obama metaphorically using the US constitution as toilet paper. The current “guard” is not only robbing us of our future within the state but also that of succeeding generations.The real crime syndicate needs to be stopped in its tracks- via impeachment if necessary but thanks to the lap dog press few people “get” just how urgent the situation is.

This is a supreme joke. This is exactly equal to Malloys so called $1.0 billion state workers sacrifice for the current fiscal year. Never happened and there is no way to measure it due to complete failure on the part of everyone in the State Government from OPM to OFA. I do not believe or accept this for a minute as just more smoke and mirrors out of Malloy and his Finance person Barnes.