Each Connecticut resident owes $5,800 for state retiree healthcare, down $2,000 since last estimate 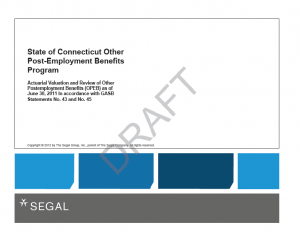 Connecticut’s long-term liabilities went in the right direction for a change, according to a draft report by the state’s new healthcare actuaries, falling from about $8,700 per person to $5,800.

Medical and prescription drug benefits for a 50-year-old retired state employee cost about $10,000 a year, according to the report by the Segal Company in Farmington. By age 64 costs rise to more than $15,000 for male retirees and about $14,000 for females.

Although mounds of debt remain – $20 billion in the case of retiree healthcare promises – the report shows the state has at least in this area slowed the growth of its commitments to retirees.

For decades, politicians around the country have found it expedient to increase public employee benefits but pay for the increases in the future. The approach is popular because employees and their unions get what they want, while taxpayers don’t immediately feel the additional burden.

Connecticut was not unique in its embrace of this strategy, but its financial condition is among the worst in the nation. According to the Institute for Truth in Accounting, Connecticut is a “sinkhole” and each taxpayer would owe more than $40,000 to pay off the state’s debts.

More recently, a counter-current has emerged that says delaying payment for benefits consumed today will leave future generations with fewer choices for how they want to spend taxpayer money.

According to the report, Connecticut’s long-term liabilities for healthcare and other non-pension benefits for retirees decreased by more than $11 billion, from $31 to $20 billion.

The last actuarial report, issued in 2008 by Milliman, pegged Connecticut’s liabilities at $26.6 billion. According to the new report, liabilities would have increased to $31.2 billion if nothing had changed. Liabilities were on track to reach $40 billion by 2017. Instead the liabilities came in at $20 billion.

“Today’s announcement is further proof that the tough decisions we’re making are having a real impact on our state’s finances,” Gov. Dannel Malloy said last week. “By planning for the long term, we can make sure that future generations won’t find themselves in a situation where they have to choose between critically important services and obligations to state employees. This report is proof that we can do both.”

“This report – revealing that creativity and collaboration have saved us billions – should be a powerful incentive to continue these efforts to reduce costs for Connecticut,” said Comptroller Kevin Lembo. “This future savings is extraordinary, resulting from partnership among state agencies and state unions in controlling costs, while maintaining quality services.”

Since the report was late, the state had to use stale numbers in its Comprehensive Annual Financial Report, as it did for the two years before that, prompting auditors to mark the reports incomplete.

The assumption changes included the creation of a trust fund for employee and state contributions the state will invest to pay for long-term health costs.

Gov. M. Jodi Rell and the State Employees Bargaining Agent Coalition instituted the trust fund in 2009. Previously, the state paid only the cost of benefits incurred each year instead of the cost of the benefits promised. It still doesn’t pay the full cost of the benefits promised, but its annual contribution and the amount contributed by some state employees is greater than the amount being paid in benefits.

The state has $49.6 million – .25 percent or one-four-hundredth of its long-term liabilities – in the trust fund.

The trust fund has the added value under accounting rules that the state can use a higher discount rate to devalue future obligations because it is investing the trust fund.

Accordingly, the actuaries increased the discount rate from 4.5 percent to 5 percent.

Under the old discount rate a dollar owed next year was counted as 95.5 cents. This follows the economic principle that a dollar today has more value than a dollar tomorrow.

Under the new discount rate a dollar owed next year counts as 95 cents. This small difference is amplified over many years.

By 2028, the last in the amortization period, the higher discount rate reduces liabilities by almost 13 percent. Depending on when the actuaries expect most of Connecticut’s future costs to come, the change in the discount rate is more or less responsible for the savings.

Under proposed new accounting rules, the state will soon have to add this liability to its balance sheet instead of reporting it in footnotes.

According to the actuaries, recent retiree healthcare costs came in lower than expected allowing them to reduce future estimates.

The actuaries also changed the prediction for medical inflation from previous reports.

At its peak difference from previous estimates three decades from now, the new inflation rate saves the state about 8.5 percent.

Lembo’s adoption of a new method of delivering Medicare prescription drug benefits has accounting advantages that allow the actuaries to use future federal subsidies to decrease the liability on Connecticut’s books.