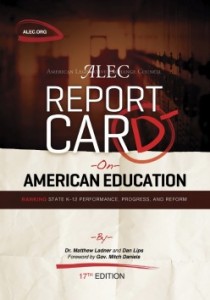 Connecticut policies showed some improvement from last year when the state received a C- from ALEC, a national organization for conservative state lawmakers.

The state performed best in home school regulations (A) and worst in teacher quality and policies (D+).

ALEC also gave the state a C for academic standards and a D for its charter school law.

According to ALEC, the schools in Connecticut spent $16,530 per student, the sixth-highest amount in the country, while the state ranks first and second in performance in two test-score categories.

The state also received credit for having an online-learning initiative.

The report cites census bureau data showing Connecticut’s per capita income, the highest in the nation, is 88 percent higher than Mississippi’s, the country’s lowest.

“When ranking states’ academic performance, we ought not to simply congratulate Connecticut schools for the good fortune of having relatively wealthy student bodies,” the report says. “Nor should we castigate Mississippi schools for the poverty levels of their students. Instead, our rankings seek to make as much of an ‘apples to apples’ comparison as possible by grading states based on similar students.”