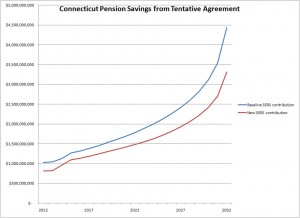 State employee unions will finish voting this week on a concession package that, if approved, could reduce the long-term cost of pensions by $7.8 billion, in addition to the more immediate savings used by Gov. Dannel Malloy to balance the state budget.

The Malloy administration estimates the state will save $485.2 million over the next two years if the tentative agreement with the State Employee Bargaining Agent Coalition is approved, a prospect that is reportedly becoming less likely as unofficial voting results are tallied.

SEBAC and administration officials remain publicly optimistic about the possibility union members will ratify the agreement.

Over the next 20 years, the proposed changes to the pension system would slow annual cost growth by about .3 percent, according to actuarial estimates. However, with pension costs still rising at 7.3 percent, they will outpace growth in both the state economy and other state spending if historical trends continue.

These figures only include costs for the State Employee Retirement System. Teachers and judges have separate pension systems with their own costs.

Malloy has budgeted $822 million for state employee pension costs next year, or 4.2 percent of state spending. State spending grew at an annual rate of 4.6 percent over the past two decades. If that pace continues, in 2032 the state will contribute 7 percent of its budget to SERS.

Without the savings assumed by the Malloy administration, the pension contribution in 2032 would have reached 9.4 percent of the state budget.

The actuarial projections do not grow at the same rate each year, which creates budgetary bumps over the next 20 years. The first will come in fiscal year 2014 when the state’s contribution will rise $143 million, or 17.5 percent.

These two bumps occur at least in part because $140 million in pension savings from a wage freeze are realized over the next two years instead of spreading them out over the period of their impact.

The Governor’s Office and the Office of Policy and Management did not respond to requests for comment on the wage freeze savings before deadline.

For the following nine years, actuaries anticipate pension contributions growing at roughly the same pace as state spending. This is followed by six years of growth between 5 and 9 percent, according to the estimates.

Another two large bumps come in the last two years: 11.6 percent in 2031 and 22.75 percent in 2032. If state economic growth continues at the same rate as the past two decades – just under 2 percent annually– the state’s pension contribution in 2032 will make up 1 percent of the state economy.

Senate Minority Leader John McKinney, R-Fairfield, has publicly criticized Malloy’s accounting of the savings, questioning whether the $1.6 billion estimate is too high. He also questioned the use of pension savings to balance the budget.

“Those savings should go into the underfunded pension fund,” McKinney said. “There are some savings but we haven’t begun to significantly tackle our unfunded pension liabilities.”

The savings anticipated by the Malloy administration do not take into account another portion of the tentative agreement that would change the “breakpoint” in pension calculations.

The purpose of a breakpoint is usually to increase the pension earned on income that is not covered by Social Security to make pensions a consistent percentage of salary for all income levels.

The tentative agreement sets aside .5 percent of state payroll – about $16 million on the current $3.2 billion payroll – to change the way the breakpoint is calculated beginning July 1, 2013.

The Malloy administration estimates this change will cost $458 million over 20 years, but none of that expense is included in the actuarial models of future pension contributions.

SEBAC chief negotiator Daniel Livingston explained the breakpoint change to a meeting of state employees earlier this month. “And what it means is we’re actually going to improve pensions for current state workers starting in 2013,” he said. “Now, the governor doesn’t exactly report it that way in the press because of the whole shared sacrifice, etc.”

The tentative agreement also includes legislative changes that formalize a past practice of allowing some state employees – primarily in the Department of Correction and the state police – to count all overtime as mandatory overtime when calculating their pension.

This is significant because the salary used to calculate a state employee’s pension – called covered earnings – is limited to 30 percent more than the average of the previous two years, but mandatory overtime is exempted from this cap.

The law change, found on the last page of the tentative agreement in Attachment D, formalizes the practice of counting all overtime for certain employees as mandatory overtime. It also creates a new cap for them at 50 percent more than the average earnings of the previous two years.

Mark Ojakian, deputy secretary of OPM, said the change was “assumed to be cost neutral.”

By agreeing to change the law, the administration gives up the ability to recalculate existing pensions to bring them in compliance with previous agreements.