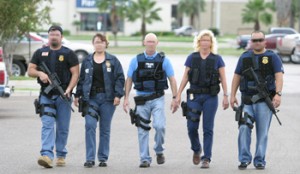 Gov. Dannel Malloy celebrated the recent passage of a bill giving in-state tuition subsidies to undocumented immigrants by calling it “an increased opportunity for our state’s students to succeed in whatever path they choose.”

As long as they don’t want to work for the State of Connecticut, that is.

“The state follows the federal law that requires employers to obtain a completed Form I-9 (Employment Eligibility Verification) from prospective employees to verify the individual’s identity and employment authorization,” said Susan Kinsman, spokesman for the Attorney General’s Office. “Thus the state does not hire immigrants who do not have authorization to work in the U.S.”

“The Attorney General does not have authority to provide legal support to private employers or undocumented workers,” she said.

Juliet Manalan, a spokesman for Malloy, declined to comment on whether the administration would hire undocumented workers or support businesses that hire them.

“Any questions about the legality of Connecticut laws should be directed to the AG’s office,” she said.

There’s no giving away of free money here. The student still has to pay full tuition (the entire marginal cost of their education at the college/university). And they would have to pay this tuition largely out of pocket (or secure private loans), without the benefit of generous government loan programs that the overwhelming majority of citizen students rely on.

How many immigrants can really afford that? Not many. We’re talking a minuscule number here, probably less than 100 per year, if that! But you know what, America is the LAND OF OPPORTUNITY. Why not let people who have lived among us their entire lives the chance, simply the chance, to pay their own way through college?

“Give me your tired! Your poor! Your huddled masses yearning to breathe free,” cries the statue of liberty! That’s the spirit of America, something your ancestors probably availed themselves of. Why have you forgotten???

Giving away free money to non-americans? Yup, you are correct, that is the american way!

I think you misunderstand the legislation that just passed. According the non-partisan Office of Legislative Research, “the bill references a federal statute (8 USC § 1621(d)), which provides that an alien not lawfully present in the U. S. is eligible for certain state and local public benefits, including postsecondary education benefits, only through the enactment of a state law that affirmatively provides for such eligibility.” The law says if you live in CT, went to 4 years of high school here, are trying to get legalized and have been admitted to a public university, your lack of completed immigration status won’t stand in your way of getting an education. Isn’t that the America way?