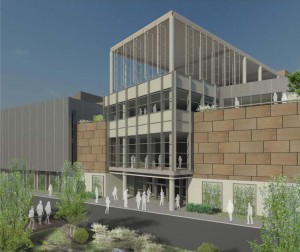 Forty-eight acres formerly in Trumbull are now in Bridgeport.

The state made the boundary change because Bridgeport and Trumbull could not come to an agreement that would allow the city to build a magnet school across the border in Trumbull. Bridgeport’s plan had languished for months with the town’s Planning and Zoning Commission – after taking several months to get needed wetland approvals.

Bridgeport and Trumbull officials, plus their representatives in Hartford, supported the boundary change.

Rep. T. R. Rowe, R-Trumbull, said he supported the boundary change, but the General Assembly’s unanimous vote “was not a referendum” on the school. He said the expected cost of the school, $126 million, “certainly gives one pause.”

“The Governor’s Office indicated that the school was going to be built, period,” Rowe said. “The state had plenty of arrows in their quiver to make sure it got built with or without Trumbull’s blessing.”

As part of the legislation, Trumbull will also have the opportunity to negotiate for the purchase of about 20 acres of state-owned land within its borders that is currently leased by Bridgeport.

Negotiations between Bridgeport and Trumbull were hung up on who would respond to the school in an emergency. It was also uncertain whether the Trumbull Planning and Zoning Commission would have approved the application, and if it did, with what conditions.

The Fairchild-Wheeler Multi-Magnet High School will have an environmental theme and capacity to serve 1,500 students. On paper the school – at $126 million – is already the most expensive in state history by at least $10 million. The school’s design includes $1 million of solar panels on the roof, wind turbines and underground parking.

The site, a park that has suffered from inattention, is not an ideal location, which necessitated the underground parking and added to the expected costs.

The city has no incentive to keep the costs down because the state reimburses magnet-school expenses at 95%. Bridgeport will pay only $7 million for the school, while taxpayers across the state will pay $118 million, plus 20 years of interest payments.

Malloy’s budget proposal recognized the flaws in the reimbursement formula and reduces the state’s share to 80 percent. This and other reforms, including limits on what costs the state will reimburse, will take effect for projects not begun by April 1, 2012.

Thus the hurry to get the school approved.

Even after it is built, the school will be a boon to Bridgeport. About 1,050 city students will attend a brand new school, making space in existing schools, at close to no cost and the state will subsidize each of those students at $3,000, or more than $3 million a year.

Six nearby towns – Easton, Fairfield, Monroe, Shelton, Stratford and Trumbull – will split the 450 remaining seats at the new school. For each of those students, Bridgeport gets $6,730 from the state, totaling another $3 million.

Meanwhile, Bridgeport will still receive its full Education Cost Sharing grant. The state won’t deduct money from the grants to suburban districts either, even though they are educating fewer students.

The planning and zoning approval process was taxing on the Bridgeport team, led by attorney Robert Berchem, of Berchem, Moses & Devlin, which usually numbered about 14 at each public hearing. The architects, construction managers, engineers and educators paid to get the project approved filled an entire side of the Trumbull Council Chambers.

Despite their numerical advantage – there are only five commissioners – the relentless demands of the commission made the Bridgeport representatives seem like David to their bullying Goliath.

“We have the Park City coming to Trumbull to take a park,” said Commissioner Fred Garrity Jr., just one example of many skeptical comments from the commission.

City versus suburb tension was also evident at the hearings. Trumbull commissioners, on more than one occasion, questioned why the school is being built in a Trumbull park instead of a Bridgeport brownfield.

On one occasion, Berchem abandoned his normally deferential attitude toward the commission. He said building the school on a brownfield would be the way “to keep Bridgeport people on Bridgeport property.”

In addition to the cross-border rivalry, there was also a turf battle going on within Trumbull. The fire marshal, responsible for ensuring compliance with the state’s fire code, apparently hadn’t communicated with the chief of the local fire district, responsible for responding to any incidents at the school.

The chief of Trumbull Volunteer Fire Co. No. 1, Ed Gratrix, has been one of the most persistent critics of the project, especially the underground parking.

“That parking garage under the school is terrifying,” Gratrix said at a November public hearing. “If I had my choice, I don’t put a school on top of a parking garage. I don’t do that, if I can help it.”