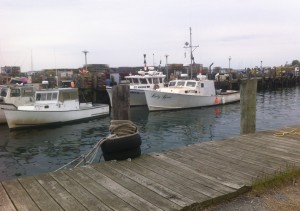 This year, for the first time, the lobster season will close for three months in the fall, part of a plan by regulators to reduce size of the lobster catch by 10 percent.

There are few industries in the United States as regulated as the fishing industry, and lobsters are no exception.

Maderia is a third generation lobsterman, and the family tradition continues as his four sons now head out into the waters of the Long Island Sound to drop their traps – a hopeful denial of the way increasing regulation and a decline in the lobster population has almost decimated the state’s lobster industry.

When his boys were nine years old he would bring them out on his boat where they were put on the bait crew. Eventually they went to work on the deck. Even after they got their college degrees, they came back to the water.

“It’s in their blood. They can’t imagine a desk job now,” he said.

But lobstering in Connecticut isn’t what it used to be – there are fewer lobsters caught in the sound and combined with increasing state and federal regulations the lobster boats have almost disappeared from state waters.

Lobstermen and state officials agree that the number of lobster in the Sound took a severe dip starting late in 1998 and continued to decrease in the years following. But they disagree about the causes.

The waters of the Long Island Sound have warmed 2 degrees over the past 30 years, and lobsters are very sensitive to water temperature, said Simpson. Scientists believe the warmer waters plus a new parasite on lobsters were to blame for the decline, he said.

But the gradual warming theory doesn’t seem to mesh with a sudden die-off. Simpson said a strong storm in the late 90s may have churned warmer waters to the floor of the sound, but he admits that after millions of dollars of research there is no “conclusive proof” that any one thing led to the decline.

The lobstermen believe pesticides may be to blame – in the late 90s towns and cities were spraying large amounts of pesticides in drainage areas to combat the mosquito-borne West Nile virus. Maderia said more predatory fish in the sound – who view lobster eggs “as caviar” – may also be to blame.

Regardless of the causes, conservation efforts are in full swing.

Federal fishing regulations are set up under the Magnuson Fishery Conservation Act, passed in the 1970s, which created eight management councils to set policy for commercial and recreational fishermen. Since 1997 the Atlantic States Marine Fisheries Commission, has managed the lobster that live within three miles of the Connecticut shore.

Last year the commission decided all states south of Cape Cod would have to reduce their catch by 10 percent for the 2013 season in an effort to revive the lobster population. Each state could decide how to reduce the catch – among the ideas put forward were increasing the size of the lobster that could be caught, throwing back all the female lobster or increasing the vent size on the traps so that more lobster could escape.

Some states are chafing under increasing federal regulation of fisheries. Even blue-state Massachusetts has had enough. State officials just announced they are suing the feds over new rules that they say will kill the state’s fishing industry.

But here in Connecticut, DEEP has fallen in line with ASMFC’s mandates. Even still, Dave Simpson said he believes it might be too late to bring lobsters back to the Long Island Sound.

“The unfortunate situation we’re in is that the stock is diminished so much, the best opportunity to preserve this resource and to prevent this may have been several years ago,” he said.

“My sons are doing just fine. They’re capturing lobsters. It’s not like it used to be,” he said. “(Simpson) wants to see the numbers we caught in the 90s, we had record catches, but we might never see them again. In the 70s and 80s there were some bad years. That’s why we believe in cycles. Why can’t it be a cycle? Why does it have to be this or that?

“Maybe Mother Nature doesn’t want you to know what’s going on down there.”