The Final Fortune: Who would win the NCAA tournament if sports were all about money? 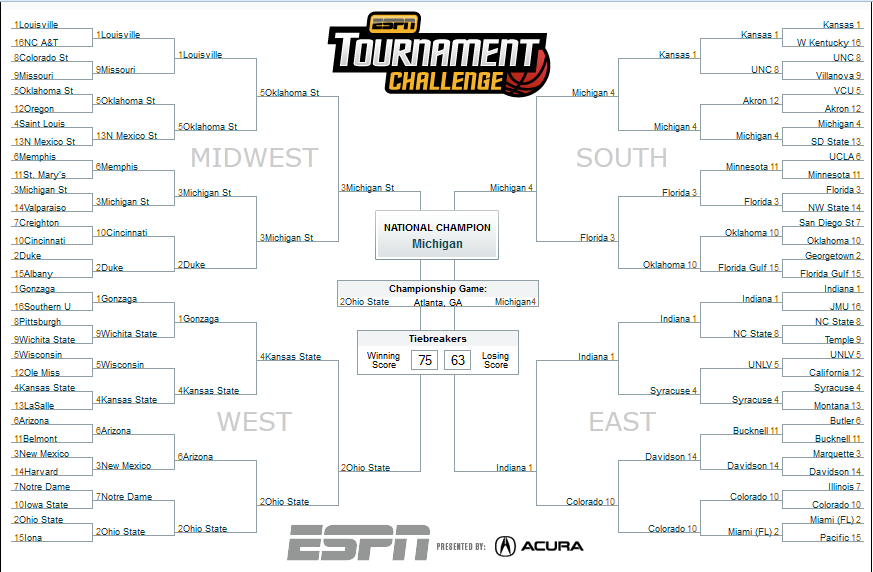 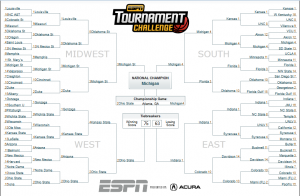 If financial success can predict the outcome of college basketball games, 4-seed Michigan will win it all this year.

I completed a NCAA tournament bracket – provided by ESPN – based on an analysis of federal filings from each of the 64 teams in the tournament this year. First, I compared teams based on the size of their sports surplus, the revenue from all sports minus the cost of running all sports programs. Second, I compared teams with equal surpluses (34 programs break even) based on the amount of revenue they generate.

A few caveats. This data is only as good as what the schools tell the federal government and some schools may interpret the instructions (75 pages here) differently.

Although it is possible to compare schools based on the finances of individual sports, this data has even more caveats. The best example is apparel. When someone buys a Wolverines hat, is that football or basketball revenue? Or what about rowing?

I don’t know what to expect from this bracket, but it should be fun to watch. Follow along with my Final Fortune bracket here. (Feel free to check my work here.)

A few interesting observations. Let’s start with some upsets in the South.

Michigan (4) goes to the Final Four and on to win the tournament, while Georgetown (2) loses to Florida Gulf (15). The Hoyas lose because they break even while the Eagles eke out a small surplus on less than one third the revenue.

The West is the most competitive bracket. Three of the top four teams in my analysis are in this bracket: Ohio State, Notre Dame and Kansas State. Ohio State (2) takes out Notre Dame (7) early. Kansas State (4) defeats Gonzaga (1) before losing to Ohio State.