Connecticut studies job impact of incentives but not tax increases 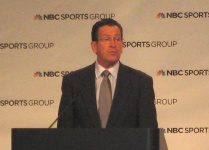 Gov. Malloy announces an incentive deal worth $20 million to bring NBC Sports to Connecticut. Photo courtesy of the Governor’s Office.

Connecticut officials emphasize the job impact of incentives given to companies, often referencing calculations done using economic modeling software to justify the deals, but they don’t apply the same scrutiny to tax changes like the largest-in-history increase passed two years ago.

Although state officials could use the same software to evaluate budget proposals or tax policy, they don’t, according to a Department of Economic and Community Development response to a Freedom of Information Act request.

“The main reason people don’t ask questions is because people don’t want the answers,” said Sen. Joe Markley, R-Southington, a proponent of lower taxes. “Or, ‘Gee, it never crossed our mind to be curious about it.’”

Malloy has made relocation incentives and other job subsidies signature policies of his administration. The programs – with catchy names like First Five, Next Five and Small Business Express – transfer state money to specific companies, often identified through an application process or negotiations with economic development officials.

In particular, legislators and DECD Commissioner Catherine Smith have cited the job projections of the REMI model, software licensed by the state to assess the economic impact of state initiatives.

Smith called REMI “a very sophisticated model” when promoting a $50 million deal with the insurer CIGNA.

Despite referencing the model in support of specific projects, state officials maintain REMI estimates are “trade secrets” of the government and cannot be released to the public.

REMI has other uses, too. State officials could model increases or decreases in state spending or changes in state taxes.

However, DECD does not apply the REMI model for these purposes, according to an attorney for the department.

“We don’t have any responsive documents since we don’t use the REMI model for that purpose,” said Amy Filotto, DECD legal counsel, in response to a request for REMI documents related to the 2011 budget or tax increases.

Regional Economic Models, Inc., publisher of the REMI software used by Connecticut and other governments, highlights the model’s usefulness for evaluating tax changes on its website.

“Tax analysts value the dynamic behavioral responses built into the REMI model. Incorporating variables representing the entire range of potential taxes, REMI models demonstrate how firms, individuals, and the economy at large respond to changes in taxes,” the company says.

“Forecasters and planners use the economic forecasts to predict economic and demographic changes far into the future. Users develop alternative forecasts within the models, providing different potential projections for the regional economy,” according to the REMI website. “Tax changes may have a significant effect on economic activity. REMI is recognized for unbiased analysis of the economic implications of tax changes.”