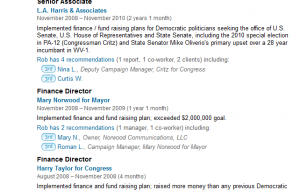 An image of Braddock's LinkedIn profile on May 31.

The finance director for Connecticut Speaker of the House Chris Donovan’s congressional campaign arrested by federal authorities Wednesday previously raised money for at least two other congressional races, according to his LinkedIn profile.

Robert Braddock Jr. worked for Donovan’s campaign until his arrest Wednesday by the Federal Bureau of Investigation for concealing the origin of campaign contributions.

Tom Swan, newly appointed Donovan campaign manager, said at a Friday press conference Donovan would not step down as Speaker and would continue to run for Congress.

Braddock was a senior associate at L.A. Harris & Associates from November 2008 to November 2010. During that time he “implemented finance / fund raising plans for Democratic politicians seeking the office of U.S. Senate, U.S. House of Representatives and State Senate,” according to his profile.

On Thursday, Braddock’s LinkedIn profile included this phrase, which was deleted as of Friday, “including the 2010 special election in PA-12 (Congressman Critz) and State Senator Mike Oliverio’s primary upset over a 28 year incumbent in WV-1.”

Mike Mikus, a spokesman Rep. Mark Critz’s campaign, said Braddock’s arrest was “quite surprising and shocking to me.”

Mikus said Braddock was not based in the district, or even the state of Pennsylvania, when he was working for the Critz campaign. He said Braddock would fly in for three to five days at a time.

“It was a different role than he had up there,” Mikus said. “Needless to say I’m still surprised by the whole thing.”

Mikus said Braddock “really didn’t have any contact with our donors at all.”

Mike Oliverio, a financial planner in West Virginia and former state senator, was not available for comment Friday afternoon.

According to his LinkedIn profile, Braddock also fundraised for the Open Source Democracy Foundation.

“This is comes as a huge surprise to me,” said Kevin Reuning, research director at the foundation. “Rob wasn’t involved very long, and we never had the sense he was capable of something like what is alleged. He was only looking to volunteer some advice to a fledgling organization.”

The Connecticut Post has reactions from other former Braddock colleagues:

“I’m shocked,” Norwood’s campaign manager, Roman Levit, said in a phone interview. “Rob did a good job for Mary. He raised a lot of money in some very difficult politics, and there was never any hint or accusation of impropriety.”

Levit said he still considers Braddock to be a friend and talks to him three or four times a year by phone.

“I never had the sense of anything being off,” Levit said.