It could happen here: Not-so-universal healthcare 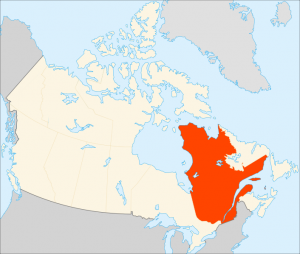 Map of Canada with Quebec highlighted. Courtesy of Wikipedia.

Wouldn’t it be great for everyone, especially the poor, if Connecticut had universal healthcare?

Probably not, as shown by a Montreal Gazette article on doctors abusing their private clinics.

Canada, of course, has a universal healthcare system, but the Gazette found 1) some patients aren’t willing to wait years for treatment and 2) some doctors are willing accept large payments ($10,000 or so) to cut wait times from two years to two weeks.

Doctors work around the system by offering the treatments at their private clinics.

In Britain, home to another much-lauded universal system, about 10 percent of the population has supplemental insurance.

Not-so-universal healthcare doesn’t help the poor because everyone has to wait to get treated.

Since socialist systems are run from the top down instead of the bottom up, there is no mechanism to get more people to enter a field and remedy the shortages.

And finally, despite having a government system, a private system emerges on top of it. Apparently, in Canada’s case, this is a black market.

It’s an unfortunate design flaw of universal healthcare systems that you have to make some healthcare illegal.

After all, it’s just not fair to compete against the government.

Raising Hale is bringing back It could happen here, a feature that has been dormant for a while. Each Friday, Raising Hale will highlight one crazy thing from the latest headlines that could happen in Connecticut. To suggest a topic, contact Zach.