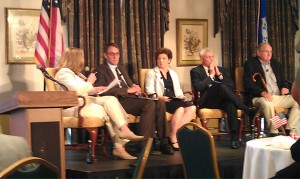 Each Connecticut taxpayer would need to write a check for $41,200 to pay off the state’s debts, prompting the Institute for Truth in Accounting to name the state a “sinkhole.”

According to the institute, Connecticut has $29.4 billion worth of assets, but only $10.1 billion are available to pay $63.4 billion of bills.

“State officials say their budgets are balanced but do not include employee pension and healthcare obligations in their calculations,” said Sheila Weinberg, founder and CEO of the Institute.  “Unlike the federal government, states can’t ‘print money’ to cover costs and shore up their financial conditions.”

The institute, based outside of Chicago, released a report earlier this month on state finances that puts Connecticut dead last with the highest taxpayer burden.

The four best-performing or “sunshine” states, according to the institute, are Nebraska, North Dakota, Utah and Wyoming. These four states have more than enough assets to cover their liabilities, resulting in a per taxpayer surplus.

The institute found $823.7 billion in retirement system liabilities that are not reported on state balance sheets.

“The opaqueness of retirement plans’ disclosures makes it impossible for even seasoned Certified Public Accountants to determine with certainty the true amount of these unfunded liabilities,” the report said.

my wife and I will be moving, maybe to FLA, and taking our assets beyond the reach of dandy dan and his merry band of tax and spenders. let the next generation of CT suckers suffer under the yoke of sky high taxes, protected state workers and a declining standard of living. too bad, CT is a beautiful state.

Well Rita…..my hubby was laid off from Big Pharma 3 yrs ago and he has been doing part-time teaching. He found a permanent job down south. Tell him to GO! 2 BR apt – $400 a month. $400 a YEAR property taxes. Gasoline is $3.00 a gallon. And Texas has no state income tax. Hubby is making $5K per year less than teaching up here; we feel that will be a net increase of about $15K. per eyr.

I have wanted to move out of this stae for some time but hubby will not.