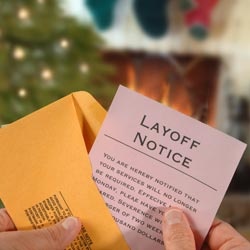 The 6,500 layoffs proposed by Gov. Dannel Malloy to balance the state budget – in addition to their impact on state government – will also cut into the budgets of the unions that represent state employees.

The State Employee Bargaining Agent Coalition and its member unions recently failed to pass a tentative agreement with Malloy, which led him to propose the layoffs.

Under the tentative agreement, state employees would have faced a wage freeze, which for some unions would have slowed the growth of their income.

But most unions would not have faced serious revenue cuts because they collect flat fees from their members each pay period.

Spread over about 50,000 state employees, the average state worker pays their union roughly $637 each year.

The 6,500 layoffs will cost the unions about $4.1 million in revenue or 13 percent last year’s total.

Larry Dorman and Matt O’Connor, spokesmen for SEBAC, did not respond to emails requesting comment.

Depending on which unions face the most layoffs, the actual number could vary. Some employees pay little or no union dues because they are managers or object to portions of the dues they are charged. Prosecutors and some judicial marshals pay half the average amount.

Other employees pay more than average. A state university professor earning six-figures, for example, would pay more than $1,000 in annual dues.  School administrators, correction officers who belong to Local 387 and state police also pay more than the average ($24.48 per pay period).

Union dues are deducted from state employee paychecks in one of three ways: a flat fee, by percentage or according to a formula.

Many employees at community colleges and state universities pay 1 percent of their income to their union. At the University of Connecticut faculty members pay .75 percent and other employees pay 1.06 percent.

The state Comptroller describes the formula-based dues in memos issued periodically. Comptroller’s list of how much each union charges.

Need to update articles with the latest goings on – Union Leadership Ammends the By-Laws to achieve a simple majority – One Big problem – Read #9 Under the By-Laws- Did anyone receive the 30 day written notice for the ammendment – Brothers and Sisters, they are playing and bending the rules because they do not like the results of the game! I honestly have no faith in our union leadership. I voted No and it was to send the union a message that I have lost all confidence in their leadership abilities. I would have posted this in IN THIS TOGETHER CT, but to my non-amazemwnt all comments ar CLOSED. TY Raising Hale for giving me this opportunity.

Union budget? I wonder how many CSEA members know that 1/3 of their dues are going to SEIU (~$1.5M) and none of it is coming back to help union members as well as no help from SEIU during these troubled times. Other than specific grants to the Exec Council President for special programs in the schools.