Foundation grants $1.1 million to unions and interest groups led by its board members 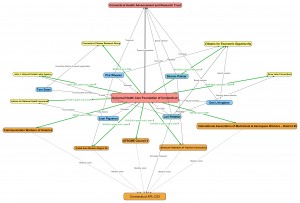 To view the image clearly, click on it once and then click on the arrows in the bottom right corner.

The board of the Universal Health Care Foundation of Connecticut may be more concerned about its own health than the health of Connecticut residents.

The foundation gave more than $1.1 million dollars in grants to organizations affiliated with its own board members during the most recent five years, according to the most recent IRS filings, 2004 through 2008.

Grants to board member affiliates represent 13 percent of total foundation awards over the five year period.

These and other activities funded by the foundation generated support for several iterations of SustiNet legislation before the General Assembly, including a current bill calling for a government-run insurance company or public option.

The foundation was one of four to hire consultants who completed a report on behalf of the SustiNet board created by the legislature in 2009.

The foundation did not respond to several requests for comment.

The Universal Health Care Foundation, formerly the Anthem Foundation of Connecticut, has a unique history. It was created to settle a lawsuit by Connecticut’s public employee unions, then-Attorney General Richard Blumenthal and then-Comptroller Nancy Wyman against Anthem when it purchased Blue Cross and Blue Shield.

The settlement funded the Connecticut Health Advancement and Research Trust, the foundation’s parent organization, with $41 million.

Blumenthal, now a U.S. Senator, did not respond to a request for comment. Wyman, now Lieutenant Governor, declined to comment through a spokesman.

Lori Pelletier, vice-chairman of the foundation and its parent organization, the Connecticut Health Advancement and Research Trust, is the secretary-treasurer of Connecticut AFL-CIO.

Connecticut AFL-CIO did not receive any money directly from the foundation. However, five of its member unions received money during the past five years for a total of $304,000.

Wheeler is also past director of United Auto Workers Region 9A (received $50,000).

Sharon Palmer, a CHART board member, is president of American Federation of Teachers Connecticut (received $104,000).

AFT and UAW are both AFL-CIO member unions. The other member unions to receive money from the foundation are:

Juan Figueroa, the president of the Universal Health Care Foundation and CHART, is also the vice president of Latinos for National Health Insurance (received $10,000).

On its website, the foundation divides its grants into nine categories: