Solar wins big in proposed energy bill – at a cost 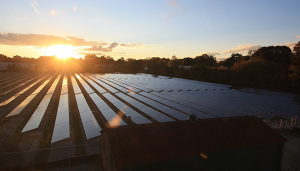 Environmental lobbyists moved quickly to take advantage of Connecticut’s change in governor and got a place of honor for a massive energy bill that will prop up solar generation with subsidies at the expense of consumers and employers across the state.

These industry giveaways will cost consumers and employers as much as 5 percent more on their electric bills. All told, the subsidies could cost as much as $270 million.

One could question the timing.

Massachusetts recently got burned on a multimillion dollar incentive package – $31 million according to the Boston Herald or $58 million according to the Boston Globe – for a solar manufacturing company lured by politicians to set up shop in their state. Everygreen Solar, which built a facility at a former military base in Devens, Mass., recently announced it would move 800 jobs out of the state despite the generous taxpayer subsidies.

Connecticut already has electric rates higher than every state other than Hawaii.

Senate Democrats made the energy overhaul Senate Bill 1 – while the state faces a $3.4 billion deficit and 9 percent unemployment. Solar generation in Connecticut is already heavily subsidized, although last year the legislature took a third of the money targeted to solar subsidies and used it to balance the budget.

Gov. M. Jodi Rell vetoed the solar subsidy bill last year, citing the costs. Not willing to let Rell have the last word and giddy to take advantage of the first Democratic governor in more than two decades, the Democratic leadership in the senate made the zombie bill their top priority.

Critics say solar generation cannot succeed in Connecticut without state subsidies and that these subsidies amount to the government picking winners and losers.

Connecticut Light & Power and United Illuminating opposed the bill on behalf of their customers. The Connecticut Business & Industry Association also opposed it.

The bill called for a tenfold increase in solar generation in a decade brought about by government mandate that makes solar a big winner. To meet the requirements of the bill, Connecticut would need to build more solar generation capacity than currently exists in the U.S. outside of California, where 73 percent of all American solar power is generated.

Even the Golden State – almost 30 times the size of Connecticut and home to the hottest desert in North America – subsidizes the solar industry to the tune of billions of dollars.

Connecticut already has a requirement that 20 percent of electricity be generated from a renewable source by 2020. The new legislation would privilege solar power at the expense of other forms of renewable energy, some of which are closer to market rates.

Last year legislators balked at the idea of a 5 percent increase in electric rates, so they capped the implicit tax at 1 percent. However, opponents of the bill believe such a cap is too easy to increase or remove down the road.

The legislation also creates a new energy bureaucracy and requires it to find a way to reduce rates by 15 percent in two years – without even a suggestion how.

Electric rates for 2011 fell by 7.8 percent for CL&P customers and 1.5 percent for UI customers under the existing system the legislation  seeks to replace.

West said UI believed the law as a whole “would have increased customer rates by a significant amount.” He said the company did support portions of the bill.

“We understand that this is the starting point,” West said, referring to this year’s bill. He said UI wants to work with legislators to create an “effective energy policy for the State of Connecticut in 2011.”

The state could reduce the impact on ratepayers by subsidizing solar projects with taxpayer money, but that would increase the pressure on the state’s budget which already faces a $3.4 billion deficit.

“Connecticut led our country into the industrial revolution with great leaps forward in technology,” Sen. John Fonfara, D-Hartford, co-chairman of the energy and technology committee, said in a statement. “We can lead again by making efficient technology affordable for all businesses and families in Connecticut. This will reduce energy demand and further lower costs.”

Boston-based Levitan & Associates, hired by the Department of Public Utility Control, estimated the bill would cost between $62 and $88 million per year because the cap would restrict cost growth. Total cost growth would exceed the cap because only some effects of the legislation are affected by the cap.

Levitan estimated costs would rise $106 to $268 million per year without the benefit of the cap – or as much as 5 percent of electric costs.

The Office of Policy and Management and the Department of Public Utility Control estimated last year’s bill would cost ratepayers “at least” $72 million for incentives and $9 million for administration, according to a memo.

In a response, two lobbyists in support of the bill, Christopher Phelps, program director for Environment Connecticut, and Roger Smith of Clean Water Action contested the estimates by DPUC and OPM.

“We are puzzled by the foundation of their analysis,” Phelps and Smith wrote. They also explain that the costs to ratepayers “would remain well below the 1 percent rate cap established in the bill.”

The DPUC hired Levitan to do an analysis in response.

“This energy bill moves Connecticut towards a cleaner, more efficient and more affordable energy future,” Phelps, program director for Environment Connecticut, said in a statement last year. “The bill will cut pollution and create jobs by building hundreds of megawatts of new Connecticut-based solar, wind, and other renewable power sources over the next decade. It will reduce our dependence on fossil fuels and save money for families and businesses through new and innovative financing programs supporting energy efficiency retrofits and installation of renewable energy systems at homes and businesses.”

Connecticut would need between 200 and 220 megawatts of new solar capacity to produce the mandated number of megawatt-hours – 4.35 million over 20 years.

One megawatt of capacity usually translates to 8,760 megawatt hours of electricity each year with a source that can run all time. However, solar capacity is not constantly producing electricity – night, winter and inclement weather all reduce output – so more capacity is required than with other sources.

Each additional megawatt of solar capacity could cost $1 million to bring online in the first year and then declining amounts in each following year.

Last year’s bill would have allowed utilities to buy in-state solar power at up to 65 cents per kwh or more than six times what customers are currently paying for electricity. The additional costs would not affect the utility companies, but would be passed on directly to consumers.

Since the solar requirement would peak at about 1 percent of total electricity generated, the legislation could increase rates by up to 5 percent if utilities paid the full 65 cents per kwh. However, the legislation also included a cap that prevented its policies from increasing rates by more than 1 percent. If rates approached the cap, the costly policies would be suspended for the rest of the year.

Connecticut’s proposed energy bill has got nothing to do with the Massachusetts solar manufacturing company you wrote about. The Connecticut bill encourages solar energy use by reducing material and installation costs. Ratepayers would pay the program cost, capped at 1%. Close to 2,000 home and business ratepayers have benefited from existing solar incentives. The Massachusetts agreement was likely a tax break in exchange for hundreds of manufacturing jobs to that state not to mention tens of millions of dollars in income tax revenues and millions more in spin off economic development. Look deeper. The deal was probably a net positive for the state.

Solar investments equate to “industry giveaways?” What industry? The dollars are returned to ratepayers to reduce the cost of solar power so it costs less to use cleaner power. It’s an incentive program designed to increase demand and production and reduce costs. Installed solar in Connecticut is almost 25-percent less than it was just two years ago. Blame the industry giveaways for this success.

You should have attributed the source of the statement that solar investments will ” … cost consumers and employers as much as 5 percent more on their electric bills” after the first use. That figure came from the DPUC which opposed the bill. The percentage was a worst case scenario that’s never occurred.

Support for solar power use in Connecticut isn’t just from Democrats. Solar enjoys bipartisan support. The solar sections of last year’s energy bill passed the Connecticut state House in 2009 unanimously. Democrats and Republicans in the House all voted yes.

Former Gov. Rell did not take a third of the money targeted to solar subsidies and use it to balance the budget as you wrote. Gov. Rell raided the state’s energy efficiency fund, not the clean energy fund.

You are correct that the use of clean energy sources cannot grow in Connecticut without state subsidies. People should understand though that all the big energy generation sectors are subsidized. Oil, natural gas, nuclear, and coal. All energy. All these energy sources got incentive funding to get started and meet the nation’s demand for energy. Strangely, years after some of them have become successful and made billions in profits, they continue to get federal taxpayer support.

The leading recipient of federal tax breaks and direct government funding? The 100 year-old fossil fuel industry got $70 billion from 2002 – 2008. By comparison, today’s renewable energy industry received $12 billion during the same period. That’s 80-percent less to the developing home-grown clean energy industry (with the promise for cleaner air and greater national security) than what the fossil fuel industry (one of America’s most mature industries) took in. If you think $12 billion is a lot (and it is) know that the corn ethanol industry (another worthwhile technology), got 50% more in tax breaks and direct spending than wind, solar and other renewables.

Yes, American consumers pay the subsidy bill. These same Americans also support renewable energy sources in broad numbers. In return, ratepayers should press the clean energy industry for long-term benefits. There is no question that the dollars spent reducing ratepayers’ cost to install and use clean, renewable, and homegrown energy will have a positive environmental, health, economic development and national security impact. But if we’re way off in our predictions that a significant increased use of renewable energy sources will translate into a cleaner, stronger, and safer America by all means kick us to the curb.

This post is a criticism of last year’s SB 493. This year’s SB 1 isn’t even written yet. No doubt there will be similarities between the two, but there will also be significant differences, particularly on solar energy.

This post implies the particulars of Senate Bill 1 are settled. They are not. Criticism of the bill should wait until it can be read.

What’s more, the characterization of last year’s bill is very misleading. The post’s second sentence falsely claims solar provisions of the old legislation would have amounted to 5% of consumer’s electric bills. The correct figure is 1%, as mandated by a cap in the bill, but this is not mentioned until the post’s 14th paragraph.

Had last year’s legislation passed, removing this cap would not be “easy,” it would require writing and passing an entirely new piece of legislation.

On the merits of 2010’s SB 493: 1% of an electric bill would have been a modest investment to produce a number of benefits: growth in CT solar businesses and jobs, increased energy efficiency, an improved environment, and a reduction in our dangerous dependence on foreign oil from the turbulent Middle East.

These are pressing issues, and this small investment would have produced great improvements.