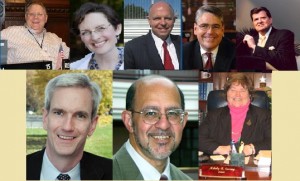 Gov. Dannel Malloy chose six current and two former legislators to serve in his administration, a decision that will cost taxpayers millions in extra pension payments when these public officials retire.

All state employees, including legislators, are eligible for state pensions based on the three highest-income years. A former legislator lucky enough to get a job in a governor’s administration gets not only a large, immediate pay raise. He also gets a huge potential boost to his pension should he stay in the administration for as little as three years.

Three of Malloy’s appointees will make more than the governor, who earns $150,000 a year. Commissioner of Revenue Services Kevin Sullivan, a former state senator and lieutenant governor, will earn $170,000 a year. Former Sen. Andrew McDonald, Malloy’s general counsel, will earn $160,000, as will former Sen. Donald DeFronzo, who will serve as Department of Administrative Services commissioner. For more salaries, see the updated Connecticut Plum Book.

If DeFronzo retired as a $39,891-a-year state senator, he would have received an annual pension of $15,201. However, after four years making $160,000 as commissioner, his pension will rise to an estimated $74,269 per year. If DeFronzo retires at the regular retirement age and draws his pension for 25 years, his total pension will reach $1.8 million. That’s $1.4 million more than the aggregate pension he’d have received by retiring as a state legislator.

McCluskey, who until his administrative appointment worked for state employee unions, will receive the same credit for each year in the part-time legislature that the state police officers and nurses he used to represent get for a year in their full-time jobs.

Reps. Chris Caruso and Deborah Heinrich will earn $70,000 as an advisor to the Department of Economic and Community Development and a cabinet-level advocate for nonprofits, respectively.

Former state representative and East Hartford Mayor Melody Currey will earn $130,000 as Malloy’s Commissioner of Motor Vehicles. Currey’s legislative pension could not be estimated, but she can expect a pension of $44,264 after four years as commissioner. Her total pension will cost taxpayers $1 million over 25 years.

Malloy appointees are not alone in receiving pension boosts from new jobs. Secretary of the State Denise Merrill, a former state representative, will earn $110,000 in her new job. After one term, her pension will rise from $11,184 to $32,920. Merrill’s pension increase is worth $583,403 over 25 years.

Of course, if any of these appointees collects a pension for more than 25 years, the cost to taxpayers would go up accordingly, not to mention cost of living adjustments which vary year to year.

All pension calculations are estimates based on not taking early retirement, salary data from www.CTSunlight.org and published biographies. They do not take into account wage increases during Malloy’s term in office or the cost of living increases guaranteed to retirees.

Most state employees can retire without penalty at age 60 or 62.

For each year of service, a state employee gets 1.33 percent of their average salary – from the three highest years. (Pension = Average salary X .0133 X years of service)

The breakpoint calculation makes the pensions of high-salary employees grow at a rapid rate.

I’m not independently wealthy but I do have my own business. I wish I could work for three years and quadruple my pension. Why should these government types get a better deal than regular people?

I am shocked to hear these people will be paid for these jobs. I’d work for nothing, but then again I’m independently wealthy.

What the heck is the purpose of this article? People get compensated for their the work they do the world over. Get a grip.

The Rell Administration salaries seem out of whack, let alone the Malloy numbers!