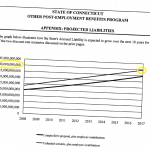 Connecticut’s unpaid obligation to provide healthcare benefits for retirees could reach $40 billion by 2017 if elected officials fail to act, according to a December estimate.

The state already owes $26.5 billion in healthcare benefits to current and future retirees. However, the estimate, done by the firm Milliman for the Comptroller’s Office, uses data from April 2008, making its conclusions 2.5 years out of date.

The report, issued on Dec. 8, does not account for the federal healthcare reform law passed earlier this year or new requirements that state employees pay 3 percent of their salary for 10 years toward future health costs.

The estimates probably aren’t fresh enough for inclusion in the state’s 2010 Comprehensive Annual Financial Report because the Governmental Accounting Standards Board requires them to be less than two years old.

Connecticut failed to include actuarial data on other post-employment benefits, known as OPEB, in the 2009 CAFR. This earned the report a qualified opinion from the Auditors of Public Accounts.

Bob Jaekle, one of the outgoing Auditors of Public Accounts, said he had not fully reviewed the estimate so he could not predict how his office would deal with the data’s age.

“At the moment I don’t know what effect it might have,” Jaekle said. “We are reviewing it.” He said there might be a need for a disclosure or another qualified opinion.

Jaekle said GASB only recently required the state to disclose its health benefit liabilities. “This is still fairly new for Connecticut and my office,” he said.

He said the 2010 CAFR was on track for release by the end of December.

Steve Jensen, spokesman for the Comptroller’s Office, said 2008 data was used to coincide with a pension valuation.

“Also, this report was delayed so that it could incorporate PEB Commission issues,” Jensen said. “The next one will be issued next fall and will use 2010 data.”

According to baseline medical inflation estimates, state spending on retiree healthcare will rise from $457 million in 2009 to $1.2 billion in 2018.

Milliman estimated the state will owe nearly $45 billion of healthcare benefits to retirees in 2017.

By factoring in the new employee contributions, Milliman anticipates OPEB liabilities rising to $40 billion by 2017, an increase of 51 percent in 10 years, although less than the trend toward $45 billion.

Milliman also gamed out a scenario proposed by the Comptroller’s Office.

In addition to employee contributions, the state would deposit $100 million up front into an OPEB trust fund. In each year following the down payment, the state would divert 10 percent of each budget surplus into the fund.

For fiscal year 2012, Connecticut is facing a $3.4 billion deficit.

Under this the comptroller’s proposed scenario, the state’s unfunded liabilities would only grow to $35 billion in 2017.

Connecticut pays for retiree health benefits as they come up, rather than setting aside money to fund them while employees are working.

For example, in 2009, the state paid $457 million to insure current retirees. However, to cover the future costs of current employees, the state would have had to set aside $1.5 billion in addition to the $457 million.

In a 2007 letter to Gov. M. Jodi Rell, Comptroller Nancy Wyman asked Rell to set up a OPEB trust fund. Wyman will be sworn in as lieutenant governor on Jan. 5.

“Connecticut’s liability would require a payment of $6,186 from every man, woman and child in the state to pay off our current bill,” Wyman wrote.

The per person liability has risen to $7,571 today and if Connecticut’s population reached 4 million in 2017, the liability would be $10,000 per person.