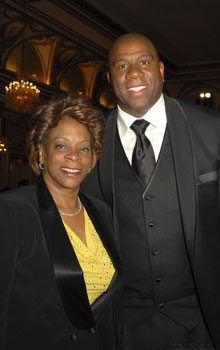 The Hartford YMCA will honor Earvin “Magic” Johnson Friday for his commitment to investments in urban and low-income neighborhoods.

The state’s pension funds, managed by state Treasurer Denise Nappier, have lost more than $15 million of the $45.6 million they invested in two of Johnson’s urban real estate investment funds.

The Johnson-related urban funds are not the only trouble spot in the state’s real estate portfolio.

In each investment category, the Treasury selects a benchmark index to serve as a performance target for its combined investments in that category. State pension investments in real estate have failed to meet the selected target, the National Property Index maintained by the National Council of Real Estate Investment Fiduciaries.

The NCREIF index returned 6.7 percent over the same period.

NCREIF also outperformed the state’s investments over a five-, three- and one-year period.

The state’s real estate investments, totaling $1.474 billion, have earned $574 million in payouts and are currently worth $718 million, according to a March estimate.

The state’s investments have lost $182 million in value, or more than 10 percent.

Poor performance in the state’s pension funds primarily hurts taxpayers. The Comptroller makes actuarial calculations to determine how much the state needs to contribute to the pension funds each year. The calculations take into account the current fund balance and estimates of future payouts to retirees.

Nappier’s office did not respond to requests for comment before deadline.

According to the company website, “With nearly $2 billion in committed capital, the Canyon-Johnson Urban Funds are the country’s premier private real estate opportunity funds focused on investments in America’s urban communities.”

The Connecticut Retirement Plans and Trust Funds have committed $50 million to Canyon-Johnson Urban Fund II. Of the $50 million commitment, the state has invested $44.1 million since 2005.

The investment has provided the state with $30,000 in payouts and is currently worth $28.7 million, a decline of 35 percent, according to a first quarter 2010 performance review.

Currently, CJUF II has an internal rate of return – a measurement of annual return – of negative 16.8 percent. The performance report projects a negative 1 percent annual return over the life of the fund.

In 2007, Connecticut committed $50 million to the next fund, CJUF III. According to the performance report, the state has contributed $1.5 million and the fund has borrowed money to make three investments.

The Treasury has also invested in four other funds with “urban” in their title.

Connecticut invested $71.4 million in the MacFarlane Urban Real Estate Fund II. The state received a $2.2 million payout and the remaining investment is worth $4.3 million, for a $64.9 million loss.

The state invested $27.2 million in the New Boston Urban Strategy Fund. It is currently worth $13.8 million.

At negative 16.8 percent, Canyon Johnson Urban Fund II has the second-highest rate of return among the six explicitly urban funds.

The bottom line – it is what it is…. It’s about time someone comes out with what a horrible job Nappier is doing – just interested in “urban” investments…. She has no clue. WHY does CT keep electing her? It’s time for a change – vote for Jeff Wright!!

Mr. Janowski wrote this story without the benefit of the facts. He went through the motions of seeking comment from the Treasury without affording reasonable time to respond to the number of detailed questions.

The facts are these: the assets of the Connecticut Retirement Plans and Trust Funds (CRPTF) are invested in accordance with a long term asset allocation plan, which includes a 5% allocation to real estate investments. The CRPTF invests in real estate to generate a return stream of current income and capital appreciation. It also invests in real estate to diversify its portfolio against its stock and bond holdings and due to real estate’s ability to protect against inflation over the long term horizon.

Like most real estate funds committed during the peak of the market in 2005 to 2007, investments made during this time period have struggled. Fund II, a 2005 vintage year fund, is mostly invested and still has several more years to harvest investment results. As of June 30, 2010, Fund II has a net internal rate of return of -3.95%, performance that is competitive with similar funds of that vintage. No investments in Fund II have been realized and until they are the ability to predict the final performance results with certainty is unknown.

Also, note that Fund III did not make its first investment until December 2009 and still has approximately 75% of the CRPTF’s $50 million commitment yet to be drawn and available for new investments. As a result, the unfunded commitment remains under the Treasury’s custody and is fully invested with periodic pacing studies performed to ensure that capital calls can be honored in a timely fashion.

The CRPTF invests in urban and rural real estate in order to meet its primary return objectives for its real estate investment strategy. Urban and rural real estate provides a unique niche investment opportunity driven by inefficiencies in these markets and barriers to entry, therefore providing untapped return potential. Of further interest to the CRPTF is that these opportunities exist here in Connecticut and offer the potential to further enhance economic development within the State.

Canyon Johnson is one of the early pioneers of urban investing and has amassed a solid team of investment professionals that have worked together for over 20 years with proven depth and skill sets to navigate through the complexities of this niche market. The investment merits that supported the worthiness of this opportunity at the time of investment included a strong track record, with the first fund largely realized, an attractive investment return target, a proprietary network of deal sourcing, and a proven investment strategy.

(1) During a prior administration, the real estate portfolio was virtually gutted, leaving only investments with significant impediments for sale or which were seriously impaired. It took the Nappier administration several years to address the long-term challenges left by some hasty decisions. The CRPTF was, simply put, not positioned to take advantage of one of the longest and strongest real estate booms our nation has seen.

(2) In addition to the need to address a difficult portfolio, the corrupt activities of Treasurer Nappier’s immediate predecessor warranted a hiatus from making commitments to illiquid investment vehicles at least until (a) her administration could understand the depth and breadth of damage done and (b) Nappier’s recommendations for Treasury Reform could be considered and adopted by the state legislature and implemented by her office. Therefore, the CRPTF did not re-enter the real estate investment market until 2004.

Over the past seven years, the most conservative, unlevered core investments have performed the best as market participants were not properly compensated for taking on additional risk. Therefore, given the CRPTF’s use of strategies that utilize more leverage, the portfolio underperformed its unlevered benchmark.

Additionally, the CRPTF rebuilt its real estate portfolio beginning in 2004, with the subsequent vintage years representing some of the most difficult times in the real estate market since the Great Depression. Typically, the first five years of an investment – known as the “j-curve” – do not produce indicative performance results because the fund is too young. As investments are realized, actual performance results crystallize — typically during years 5 through 10 of the investment. The Great Recession has exacerbated the typical j-curve effect through the significant disruption in the real estate markets characterized by significant peak to trough declines of over 40%, lack of market transactions, inability to secure financing, high levels of unemployment and low levels of economic growth.

With that said, the real estate portfolio has a 40% percentage allocation to core assets which are beginning to rebound. The balance of the portfolio is invested in value add and opportunistic strategies, and includes nearly $500 million in unfunded commitments that are ready to be invested at the much more attractive valuations.

Going forward, the CRPTF will continue to prudently manage its real estate portfolio within the risk and return parameters prescribed by policy. To date, the CRPTF has slightly increased its core allocation by $50 million and successfully invested $200 million in the Public-Private Investment Program (“PPIP”) during 2009. The PPIP investments are on track to meet our return objectives of 15% to 18%.

During calendar year 2011, the CRPTF is scheduled to begin an asset allocation study, which will reassess the capital market outlook for all assets classes, including real estate, and develop policy weights for each of the CRPTF’s 14 plans and trusts.