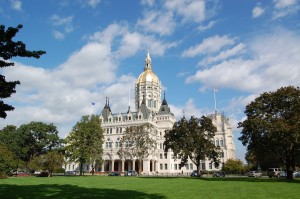 In a marathon, one runner leads the pack. In an army, one leader stands at the head.

In the Connecticut General Assembly, everyone’s a leader.

The House is less Utopian with only two out of three state representatives getting a fancy title.

Each “leader” gets a little extra in his or her state paycheck.

That means there are more leaders in the Connecticut Senate than in the U.S. Senate – which has nearly three times as many members.

In the state majority, 77 leaders guide 40 rank-and-file members, while in the minority 30 leaders are in charge of the remaining 7.

It works out that 67 percent of Democrats and 81 percent of Republicans are in the House leadership. There are 31 Assistant Leaders, 18 majority and 13 minority, a rank which accounts for about one-fifth of the House.

The additional pay to all of the leaders in the House costs taxpayers $494,409.

Doug Whiting, communications director for House Democrats, said his caucus had a lower percentage of leaders than the other three caucuses.

He said if chairmen and ranking members are excluded both Senate caucuses have 100 percent of members in the leadership, House Republicans have 54 percent and House Democrats have 46 percent.

Whiting said House Democrats, including chairmen and ranking members, have 67.5 percent of members in the leadership compared with 81 percent for House Republicans.

House Republicans did not respond to requests for comment by deadline.

“I can’t speak for the majority caucus,” Senate Minority Leader John McKinney said. “As Republicans we have argued that we have too many committees.”

McKinney said being a ranking member or chairman should be a step toward a leadership role, but his caucus is so small everyone has to play a bigger role.

“We will not have as many committees,” McKinney said, committing to a reduction if Republicans win the majority in November. “That would make chairmanships more significant.”

However, despite the pay cut the three leaders still make more than the standard $28,000 senate salary.

This is exactly what’s wrong with Connecticut.They all want to be leaders in name only, in salary and perks only, and not a one of them, wants to be a real leader and actually solve a damn thing. This collective group of misfits and misguided have run our state economy in the ditch, have dramatically escalated our debt and made history busting tax increases. With a track record of failure like this, they should all take the lead and resign rather than darken the doors of their “leadership” offices one more time. Calling them a leader is a cruel joke that is designed to pad their pockets and rip off taxpayers.

For a better perspective, the author should include a break down of the extra pay by legislator. It looks like an average of about $4,800 additional per legislator, which would bring the average annual pay up to about $32,800.