Stimulus money in Connecticut overstated, some heads to Spain via UConn 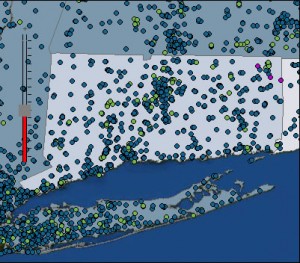 Inaccurate financial reports, overstated job creation and an overseas project raise questions about how federal stimulus money is being spent in Connecticut.

The administration of President Barack Obama has put an emphasis on making sure the money is used properly, but errors suggest the federal government is struggling to track stimulus spending in Connecticut with accuracy.

One graph on recovery.gov, the federal website tracking stimulus funding, shows Connecticut losing $8.3 million in stimulus money between December and March. According to officials in Washington, the state didn’t lose money, though. The numbers just aren’t right.

State Recovery Act coordinator Matt Fritz said the reporting on stimulus projects has “improved vastly” and continues to get better.

According to a review of recovery.gov, 242 zip codes in Connecticut have received stimulus funding. However, one zip code belongs to a housing authority project that is in Upland, California, except for a typo in the state abbreviation. The project is actually in California.

A second project is reportedly taking place in zip code 41004. That is Brooksville, Kentucky.

However, money for this project isn’t going to Kentucky. It’s going to Seville, Spain, which also has a postal code of 41004.

The University of Connecticut received a National Science Foundation grant for $479,660 to study bacteria. Most of the money is being spent in Storrs, where it has created 1.87 jobs.

However, a subcontract for $134,024 went to the University of Seville. UConn spokesman Christine Buckley said “there aren’t any laboratories in the U.S.” that have the equipment owned by the Spanish university.

According to an abstract on the National Science Foundation website, the project seeks to better understand the differences between species of bacteria. The abstract also highlights the international nature of the project.

In Connecticut, at least 102 recipients of stimulus money – nearly one in six – reported receiving more money than they actually did. These overstatements create the appearance that money is flowing back to Washington.

For example, the state Department of Transportation reported having received $70.8 million in January for its Amtrak bridge over Route 1 in Branford – enough to complete the project. Three months later DOT said it had received only $3.7 million.

A Merritt Parkway project in Fairfield reportedly got $25.3 million in January, but in April it only reported having $7 million from Washington.

Another Merritt Parkway project, this one in Trumbull, reported creating 47 jobs in January, but corrected that number to only 13 in April.

The 10 most overstated projects are all large Department of Transportation efforts. Each reported receiving at least $2 million more than Washington actually sent.

These overstatements were fixed – three months later when the state filed new reports.

Those same 10 projects said they had already created 123 jobs in December, but reduced the number to 67 jobs in March.

Recipients of stimulus funds in 16 other states reported the wrong numbers to the federal government, creating the same appearance that stimulus funds were flowing out of the states and back to Washington.

Ed Pound, director of communications for the Recovery, Accountability and Transparency Board – the board that manages recovery.gov and monitors stimulus spending for waste, fraud and abuse independent of the Obama administration – said there are two reasons for the numbers falling in these 17 states.

He said some recipients failed to deactivate the fourth quarter 2009 report when they submitted their first quarter 2010 report, causing the amounts to be double counted.

With some people reporting the awarded amount as the received amount, Pound said, “there’s going to be some screwing of the numbers.”

“For this quarter they put the correct amount in the received” report, he explained.

Recovery.gov provides clear visuals of the overstatement effect, with the amount received in the 17 states rising quarter after quarter on line graphs, then taking a fall in the most recent period.

Connecticut’s fourth quarter amount was overstated by at least $8,358,085. An initial review could not determine the total overstatement because new money arrived at the same time as the corrections were made.

The money received was over-reported by as much as 33 percent in North Dakota, also leading the pack with the highest amount overstated, $131,852,789.

Montana and New Hampshire ranked next with an overstatement of at least 16 percent. South Dakota, Arkansas and Nebraska were overstated by more than 10 percent.

Zachary Janowski is an investigative reporter for the Yankee Institute for Public Policy.