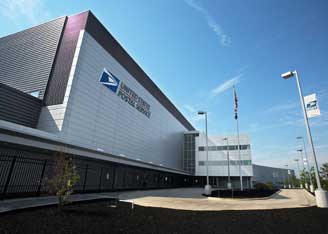 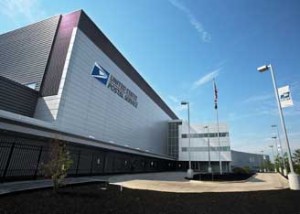 A U.S. Postal Service processing and distribution center. Photo courtesy of the USPS.

Federal authorities arrested a Connecticut employee of the United States Postal Service Thursday on charges he set up a company to profit from construction contracts he oversaw.

Robert Giulietti, 55, of Cheshire, was charged with bribery, conspiracy, wire fraud and money laundering. The U.S. Postal Service Office of the Inspector General seized more than $600,000 in proceeds from Giulietti’s alleged scheme.

The investigation is ongoing, according to U.S. Attorney David Fein.

The USPS recently posted a $15.9 billion loss for 2012 and is facing a number of financial challenges.

According to Fein’s office, Giulietti worked as a facilities project manager for the USPS at its Northeast Facilities Office in Windsor.

“Giulietti’s duties included recommending and selecting facilities improvement contractors, reviewing and approving bids received from those contractors for USPS work, certifying the completion of work by contractors and approving payment authorizations,” the U.S. Attorney’s Office said in a statement. “The complaint alleges that GIULIETTI accepted significant corrupt payments from contractors doing business with the USPS in return for being influenced in the performance of his official duties.”

Fein’s office said Giulietti also allegedly created MGC LLC, a shell company, in 2009 “to do business with the USPS on projects on which he worked.” His position allowed him to direct business to the company, approve its work and authorize payments to the company, according to the criminal complaint.

MGC never did any work, according to the complaint. Instead, Giulietti hired other contractors on behalf of the company. “Giulietti generated hundreds of thousands of dollars in profit by having MGC charge USPS more than MGC had to pay the contractors who performed the actual work,” the U.S. Attorney’s Office said.

Giulietti also made financial transactions to cover up his scheme, according to the complaint.