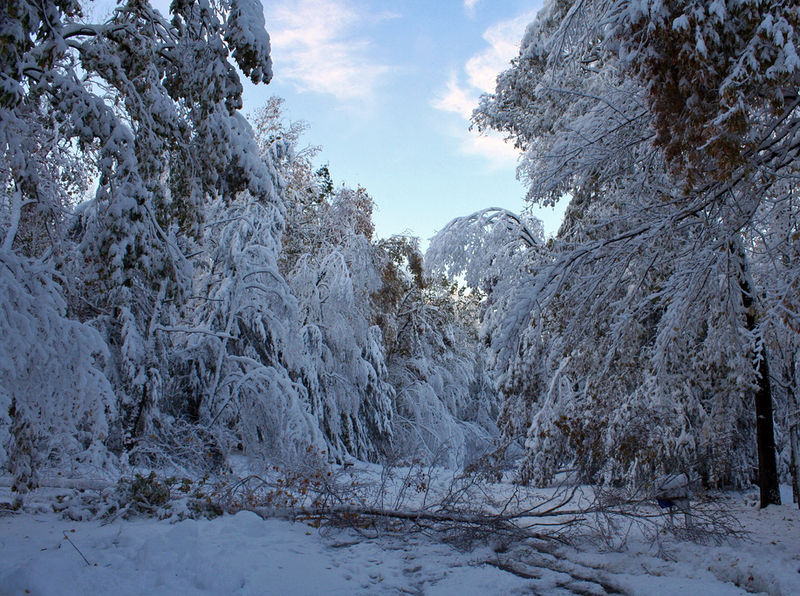 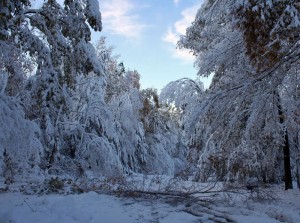 Fallen trees block the road in Granby after the October 2011 snowstorm that cut power to millions. A state contract caused some municipalities to pay more than double the market rate for many services, wasting at least $20 million. Photo courtesy of Dave Ginsberg via Wikipedia.

With Hurricane Sandy threatening, it would pay for local officials to look back on the freak snowstorm that struck one year ago.

The early snow stuck to leaves hesitant to fall bringing down many, many trees. The disruption in electricity to thousands of residents for days received public and political attention.

But after power was restored, the debris littering the state’s roads needed to go somewhere.

Connecticut cities and towns paid contractors millions to dispose of fallen trees and other debris in the wake of storm, but some communities paid twice as much as others for the same services.

A state contract led 16 municipalities to spend millions above the market rate for these services, with excess costs of at least $20 million shared between local governments and taxpayers nationwide.

Although competitively bid, the open-ended state contract with Florida-based AshBritt was not competitive with the prices paid by towns that chose to use their own process to select a contractor.

With Hurricane Sandy expected to do unprecedented damage to Connecticut, it is likely cities and towns will need to make significant decisions about how to remove debris in safest and most cost-efficient way possible.

“The last time we saw anything like this, was never,” Gov. Dannel Malloy said, as reported by the Connecticut Mirror.

If the damage is anywhere near what is expected, towns will again need to make a decision whether to use the state contract or to bid the projects out at the local level.

After the 2011 snowstorm, called Alfred by some, the Hartford Courtant reported on Glastobury’s plan to save by avoiding the state contract.

At the time, the town estimated it would spend $1.7 million on clean up costs. The town ended up spending about $2.4 million with its contractor, Tennessee-based Michael’s Tree & Loader Service.

If the town had used the state contract instead, it would have spent more than $6.5 million for the same work, according to a Raising Hale analysis of invoices.

Glastonbury Town Manager Richard Johnson said he estimates net savings to the town of about $1 million, which reflects a 75 percent reimbursement rate from the Federal Emergency Management Agency.

In addition to the savings for local taxpayers, Glastonbury’s decision to use a different contractor saved taxpayers around the country more than $3 million, according to an analysis of invoices.

He said he would consider using state contracts in the future, but the decision would be “situational.”

Raising Hale reviewed invoices obtained through Freedom of Information Act requests from 24 towns over the past year. Sixteen of the municipalities reviewed used the state contract, eight avoided it.

In addition to the savings calculated for this article, some towns also saved on debris monitoring. Because debris volumes cannot be reviewed once the material is discarded, FEMA requires local governments to hire debris monitors who watch over the collection process.

The state has a debris-monitoring contract with Beck Disaster Recovery, which was acquired by SAIC. Under that contract, debris monitors cost $44 per hour and supervisors cost $65 per hour.

Glastonbury hired temporary town workers, paying them $15 per hour as monitors and $25 per hour for supervisors, according to Johnson.

West Hartford, one of the hardest hit towns, could have saved more than $6 million if it had not used the state contract with AshBritt.

West Hartford Town Manager Ron Van Winkle said public safety was a primary concern. He said the town is setting up its own contract for future debris removal.

“We have never needed this type of service and thus did not have a bid in place for clean up necessary,” Van Winkle said. “Had we waited and put out a bid we would have not made the right decision for public safety.”

“Ashbritt and SAIC kept excellent records and because of that effort we have already been paid by FEMA for the work.  It was the right decision at that time because of the substantial devastation West Hartford experienced,” Van Winkle said. “That being said we have put out a bid to see if we can get better prices than the state bid.”

West Hartford’s savings would have exceeded $1 million in city money and more than $4 million in federal money.

AshBritt charged towns $21.25 per cubic yard to gather roadside debris and bring it to a collection site within 15 miles. Towns that didn’t use the state contract paid companies less than $8 per cubic yard for the same service.

The collection charges made up the bulk of the costs for most towns.

To grind the collected material, AshBritt charged $6 per cubic yard, while other towns paid between $1 and $5. Only one town that didn’t use the AshBritt contract paid the $6 rate.

AshBritt also charged different rates to cut down trees depending on the size of the tree.

For a tree six to 12 inches in diameter, AshBritt charged $210. Michael’s Tree & Loader Service, the company used by Avon, Farmington and Glastonbury charged less than $50.

For trees larger than four feet in diameter, AshBritt charged $1,200. Farmington paid only $950.

Unlike other bidders for the same contract, AshBritt did not include an overall project-management fee for debris removal. Instead, it charged higher prices in most categories.

The state also selected Phillips & Jordan as a finalist, but did not activate the contract with the company after the 2011 snowstorm.

Phillips & Jordan would have been cheaper for some towns to use, even if they each had to pay the project-management fee.

For West Hartford, which had 380,000 cubic yards of debris collected, the fee would have amounted to $1.45 per cubic yard. The town would have saved $9 per cubic yard on collection and hauling if the Phillips & Jordan contract had been in place.

If the state had activated the contract with Phillips & Jordan, West Hartford would have seen net savings of more than $7 per cubic yard, or more than $2 million.

According to the Department of Administrative Services, the contract was not awarded by price alone. Cost was a factor, but the department considered other factors, too.

The Department of Energy and Environmental played a lead role in coordinating the contract.

“We extended the availability of these contracts [again, intended for state agencies] to municipalities so that they would have access to these specialized contractors, which is important because towns must also use competitively bid contracts, and some may not have had the time or resources to do so during the response,” Schain said. “Towns are not obligated to use the state’s contractors, they are simply a resource.”

Glastonbury’s Johnson said his town could have chosen to use the state contract if none of the bidders at the local level met its needs.

Schain said the companies have “great experience and expertise in dealing with FEMA” allowing them to get “the maximum reimbursement possible from the federal government.”

“An interesting aside is that during the response to Alfred, the state’s stand-by contractors employed hundreds of state residents and pieces of equipment,” he said.

Glastonbury had to go through a public appropriation process which delayed the beginning of debris cleanup for a few weeks, according to Johnson.

“We had some folks that were criticizing us” for the delays, he said. “That does fall under the heading of ‘you can’t win.’”

“We learned because Avon and Farmington were a little bit ahead of us,” Johnson said. “That is not a process that’s commonplace to New England.”

The panel convened by Gov. Dannel Malloy to review the state’s response to Hurricane Irene and the October snowstorm did not address the cost of debris collection in its final report.

In one case, Bethel paid another contractor the same price paid to AshBritt for one service. That price was not used to calculate the savings estimates.

Raising Hale received documents from eight towns that did not use the state contract, Brookfield, Middletown, New Britain, Redding, Windsor, Glastonbury, Granby and Rocky Hill. The contractors used by some towns did not include unit prices on their invoices that were easily compared to the AshBritt prices.