As Maine Goes, Connecticut Should Not 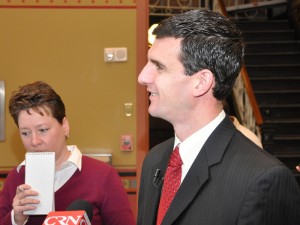 by Fergus Cullen and Tarren Bragdon | The expression, “As Maine goes, so goes the nation” comes from Maine’s reputation as a national bellwether. But when it comes to health insurance, Connecticut should not take Maine’s lead.

Some Connecticut legislators want to give the State new authority to further regulate insurance premium pricing for individuals who buy their own health insurance. A bill being considered by the General Assembly, S.B. 194, would politicize Connecticut’s current premium approval process making it like that found in Maine.

Don’t. Maine is a great place to visit, but you wouldn’t want to buy health insurance there.
Connecticut has one of the most affordable and choice-rich individual insurance markets in the Northeast. According to ehealthinsurance.com, one of the most popular Connecticut plans sold costs just $117 a month for a $5,000 deductible with no cost-sharing beyond the deductible. This is the cost to an average Connecticut uninsured male – man in his mid-thirties. The most popular comparable Maine plan features a $5,000 deductible with a monthly cost of $318 – almost three times more expensive than the Connecticut plan.

This alone should give legislators pause about changing a good thing.

Maine has a much politicized premium approval process like the one being proposed by S.B. 194, with Maine’s Attorney General playing an aggressive role. Yet, Maine’s premium approval process has had a very negative impact on patients – the very people it was supposed to help.
Consider what has happened in Maine as a result of this and other restrictive, although often well-intentioned, regulations.

Carriers left the market resulting in less choice for consumers. Maine has just three companies selling to individuals with only one major carrier accepting new business. Connecticut has ten. New Hampshire, with the same population as Maine, has nine. In the early 1990s, before Maine created a more politicized and restrictive regulatory environment, there were eleven carriers in the individual market.

The individual insurance market shrunk. In 1993, before Maine implemented its guaranteed issue mandate, restrictive rating, and politicized “file and approve” process, there were almost 90,000 people in Maine’s individual insurance market. Today, there are fewer than 29,000 people who obtain insurance this way. Despite the fact that the individual market has been growing nationally, even in this recession as people lose employer-sponsored coverage, the market in Maine is in a death spiral.

New subscribers can’t access certain lower-cost, tax-advantaged plans. Because the Maine Bureau of Insurance approved a premium increase that was below trend in Maine’s individual market, the Health Savings Account (HSA) product had to be pulled off of the market, so that costs for small business and other individual plans would not have to increase to subsidize it. The approved rate was not adequate and was approved in a way that charged different premiums for new and renewing customers. This means that today Maine patients are stuck with high deductible plans with no pre-tax savings option. This is all because of the politicized process that ultimately took away choices for the consumer and increased their tax bill for their out-of-pocket expenses.

Carriers are unable to introduce new products and lower cost plans. Because of the lengthy, unpredictable process, effectively carriers are unable to create new plans until they go through the approval process for current plans. This means new, more affordable options are not on the table. In Maine’s individual market, the deductibles increase in $1,000 or $5,000 increments. Those aren’t real choices. This limits choices and forces patients into higher cost or higher deductible plans than what they may want or what may be ideal for their situation.

The approval process is drawn out, creating uncertainty for consumers with little impact on overall premiums. In 2009, a Maine carrier announced in January a premium increase to go into effect May 1. Because of delays in the hearing process and revised filings, the actual approved rate was effective on July 1 with an average increase below the trend of increased medical claims. The difference for a typical plan between the original requested monthly premium and the final approved premium was $11 a month. That is a long, contentious process for not a significant difference in cost to the patient.

Maine and most other Northeast states wish they had Connecticut’s choice-rich, affordable, and competitive individual insurance market.

Tarren Bragdon (tbragdon@mainepolicy.org) is CEO of The Maine Heritage Policy Center. Fergus Cullen (fergus@yankeeinstitute.org) is Executive Director of the Yankee Institute, Connecticut’s free-market think tank located on the campus of Trinity College. A joint report on SB 194 and the Maine experience is available at YankeeInstitute.org.