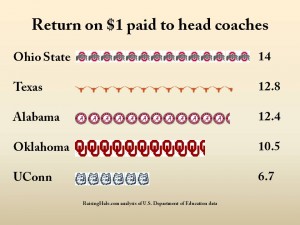 Look at the evidence.

UConn’s athletic program has undoubtedly earned its national reputation on the court and the field.

This success, however, is not as clear-cut on the financial side, according to an analysis of federal data on 124 four-year Division 1-A colleges and universities. (The top 20 data is here.)

UConn ranked 47th for sports revenue, but paid its head coaches – as a group, for all sports – more than all but four other universities.

Mike Enright, spokesman for UConn athletics, cautioned against comparing total revenue in the federal data because UConn only counts privately-raised money when it is spent, not when it is received.

According to the UConn Foundation, donations to support the athletic department last year totaled $21.8 million.

If the donations from last year were added to UConn’s revenue total, it would rank 20th for revenue. This approach may be double-counting some UConn revenues while it also ignores that other schools could account for fundraising the same way.

The federal data does not include salaries for specific head coaches. On average, a full-time UConn head coach earns $527,000.

UConn’s average salary for head coaches ranks 17th because it has more coaches than many other high-paying schools.

Excluding the three high salaries, the average salary for a full-time UConn head coach is $226,000.

Auriemma signed a new five-year contract in March for $10.8 million, a $560,000 per year increase over his last contract.

Calhoun, now retired, served as special assistant to the director of athletics until last month. He is now head coach emeritus.

In 2009, Calhoun got into a shouting match with Ken Krayeske, a journalist and former candidate for Congress, about his salary.

“Not a dime back,” Calhoun said at the time, according to the Courant. “Quite frankly, we bring in $12 million to the university, nothing to do with state funds,” Calhoun said. “We make $12 million a year for this university. Get some facts and come back and see me!”

Calhoun’s characterization accurately reflects the federal data. UConn head coaches bring in about $6.70 in revenue for every $1 they receive in pay.

However, other top-paying schools get a much better financial return on their investment, nearly twice UConn’s rate.

The other top 20 schools for head coach pay are much larger as measured by athletic revenues, with only private Vanderbilt bringing in less than UConn. Top-ranked Texas dwarfs UConn, bringing in $100 million more than UConn’s $63.8 million.

The Universities of Notre Dame, Tennessee and Michigan would have to double their coaching salaries to reach the same ratio.