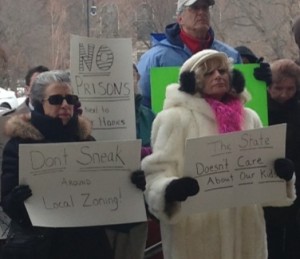 The plan would have a private company reopen the shuttered Haven Health Care nursing home on West Street, located in a residential neighborhood, as a long-term mental health facility for both former prisoners and other patients.

“We’re being told by the governor’s office and his staff that this is about NIMBY – Not in My Backyard – and my response to that is, ‘Yes, it is but not in anybody’s backyard across the state of Connecticut,'” La Rosa said. “A facility like this should never exist in any town.”

State officials developed the plan as a way to save money. Housing inmates in a private nursing home allows the state to become eligible for a federal subsidy that covers half the cost of the facility, or about $5.5 million, as reported by the Connecticut Mirror.

“We don’t want any community to go through what we’re going through,” Guerrera said.

Neighbor residents at the protest said they were afraid prisoners would have a direct line of sight into residential homes and yards, potentially putting children at risk.

“It’s walking distance from my house,” said Lena Daley, a concerned parent and Rocky Hill resident. “No one is properly trained to react to anybody that poses such a severe threat.”

“In the event that something does happen where iCare is unable to contain the prisoner and they escape there’s literally minutes before that prisoner has access to a neighborhood full of children and residents,” Daley said.

“I worked at Garner Correctional which is the state’s mental health facility,” said Steve Curran, a correctional officer with more than 22 years on the job. “The inmates are going to be released from DOC, I’m not sure exactly under what premise, and into this private company who will hire $10-an-hour private security to watch it, non-union.”

Property values may also be at stake. “I don’t need any help with having my house value drop,” Daley said, who added co-worker previously considered buying a home in Rocky Hill but stopped after hearing of the proposal.  “It’s already affecting the town’s reputation and the values of our homes and its all because it poses such a security threat to the citizens.”