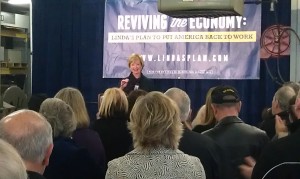 Linda McMahon addresses a rally at Coil Pro in Southington.

Republican Senate candidate Linda McMahon held a rally Monday at Coil Pro in Southington, not far from my house, along with state Sen. Joe Markley and other local candidates.

After the rally, I asked McMahon about her legislative priorities if elected to the U.S. Senate.

She said it won’t be easy to get her six-point jobs plan passed, but she would be “very upset” if it wasn’t passed in the next two years.

“We’re going to have to build coalitions,” she said.

She said she looks at the plan as a whole, but is open to amendments or changes “as long as we’re cutting spending.”

During the rally, McMahon encouraged supporters to get out the vote. She asked them to wear their campaign buttons and shirts through tomorrow.