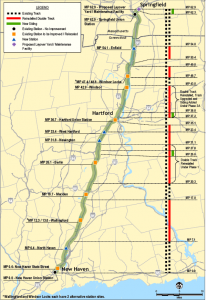 Connecticut received $121 million last week for its rail line from New Haven to Springfield via Hartford.

And all the politicians rejoiced.

Before last week the federal government was only threatening to fund this project. Now it is promising to fund it. That’s a two-step well-designed for election-season publicity.

As Caitlin Landers reported over the summer, the project is $281 million short and that’s not even counting the last two phases. Why? The costs associated with completing this project are currently unknown.

This announcement does nothing to change the shortfall.

To cover capital costs alone, the state would need to charge riders an average of $25 a ride. Forget about paying conductors or running the trains, not to mention the capital costs we don’t know about yet.