It Could Happen Here: Savings, unknown 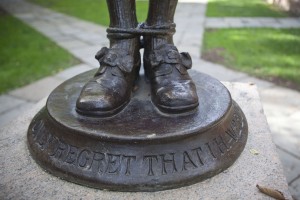 Canada’s Parliamentary Budget Officer wants to know how the government plans to save $5.2 billion.

The departments say the savings are “efficiencies,” but won’t give any more details, forcing the PBO to go to court.

Parliament created the PBO because Conservatives wanted an office to “provide an accurate, impartial accounting of federal finances,” according to Andrew Coyne of National Post, similar to the U.S. Congressional Budget Office.

PBO Kevin Page asked the departments to clarify the cuts because the terminology was vague.

Coyne said officials have lied to Page and politicians have “ridiculed” him.

Page requested financial information from 82 departments, but received only 16 responses.

Wayne Routers, Clerk of the Privy Council, denied the request on the grounds that the government had to notify unions before he could release information to the public, but Page says that isn’t one of the statutory reasons for noncompliance.

“Could” happen? It IS happening as Caitlin alluded to concerning the lack of specificity of the savings that were to total $180 million… unless there are real and specific savings itemized for public scrutiny then they didn’t happen. The savings rhetoric is little more than a smokescreen for the benefit of the average taxpaying member of the working class who hasn’t the time nor inclination to look past the headlines or to question what the MSM chooses to feed us under the label of “news”. I’d wager that any specific “savings” that Malloy might itemize when pressed for details would be no more than purposefully inflated expenses representing huge increases that are “reduced” to become smaller increases and not meaningful cuts as he would have us believe.

A similar trick is played in the retail game where an item that might be worth $10 has a price display featuring a “regular” price of $49.99 printed with a thin line through it and in gaudy bold red ink the “bargain” price of $19.99 arranged to impress the notion on the consumer that he or she is getting the item for less than half price when in reality will be charged almost double its true value.

It is a loose analogy I know but the level of disrespect shared by the retail sector and the government for the consumer and taxpayer is pretty much equal. We seem largely to be seen as a money garden to be stripped of as much of the cash crop as possible and we’re brainwashed into actually believing that we’re getting something in return. In truth it boils down to the fact that we’re being robbed- albeit that it’s with with our cooperation through willful negligence to educate ourselves as to the nature of the game in which we’re participating.