CT pensions worth about 50 cents for each $1 in pay 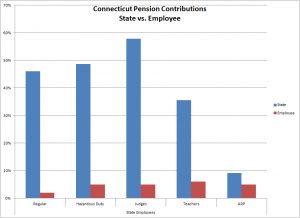 Pensions for Connecticut state employees are worth nearly 50 percent of their income, according to a memo from the state Comptroller, only exceeded by the value of pensions for judges, worth about 58 percent of income.

Regular state employee pensions are worth 46.01 percent of pay, according to a memo from Comptroller Kevin Lembo dated July 1.

Most state employees contribute 2 percent of pay in addition to the state’s contribution, earning them a 2,300 percent return on investment.

Employees hired between 1984 and 1997 contribute nothing to their pension.

Hazardous-duty employees – including state police, correction officers and other designated employee groups – receive pensions worth 48.71 percent of pay. They contribute 5 percent of their income or, for employees hired between 1984 and 1997, 4 percent.

Participants in the Judges Retirement Fund, which also includes certain other employees, receive pensions worth 57.84 percent of income.

Judges contribute 5 percent of pay to the fund, earning them an 1,100 percent return on investment.

Teacher pensions are worth 35.56 percent of pay. Teachers contribute 6 percent of income to their pension fund for a 600 percent return on investment.

University employees in the Alternative Retirement Program receive retirement benefits worth 9.17 percent of income. They contribute 5 of pay toward their retirement.

Connecticut’s pension funds are underfunded by more than $20 billion by the most conservative estimates.

If it does include making up for underfunding it shouldn’t. This is the rate the state bills the federal government on grants. It wouldn’t make sense to charge grants today for pensions offered years ago.

I see that number but I think it includes the extra amount to reduce the under funding?