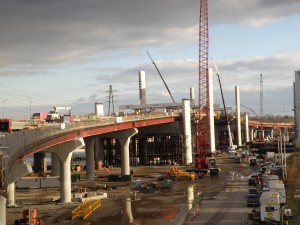 Construction at the Q Bridge in New Haven. Courtesy of I95NewHaven.com.

U.S. Rep. Chris Murphy criticized state officials Friday for not having enough projects ready for construction, a characterization the Connecticut Department of Transportation contests saying there are numerous projects underway.

Murphy, a Cheshire Democrat who is running for U.S. Senate, spoke mostly about political gridlock in Washington at a breakfast sponsored by the New England Council and the MetroHartford Alliance, but he also spent some time talking about state and federal transportation issues.

He criticized the House of Representatives and, in particular, Speaker John Boehner, an Ohio Republican, for failing to pass a bill to fund transportation projects around the country.

Instead, the House recently passed a stopgap three-month funding measure.

Even if Congress passes a bill, Murphy said, Connecticut has its own set of problems on the transportation front.

“We’ve got a particular problem here in Connecticut in which, even if we were to get a big investment of dollars or a guarantee of money through the rest of the year – for reasons that are a little bit beyond my understanding – we don’t have a lot of projects designed and ready to go in this state,” he said. “So we’ve got a state problem.”

“We’re going to potentially have a very slow construction season this summer and fall, even if we get a long-term authorization,” Murphy said. “We ran through all of our designed and engineered projects with the stimulus money and then did not as I understand really get another set of projects ready to go.”

“We’ve got a particular problem here in Connecticut,” Murphy repeated.

“There is a lot of work going on and ready-to-go this year, creating or sustaining thousands of jobs,” Everhart said. “The trend has been very positive.”

Connecticut DOT has made more than 50 construction announcements so far in 2012.

“There is also active construction under way at several of the DOT-owned service plazas on I-95, the Merritt Parkway and I-395, and more designed and ready to start in April (notably the two in Darien on I-95),” Everhart said. “The reconstruction of the Amtrak Bridge on Route 1 in Branford and the accompanying widening of Route 1 is another major, ongoing project, with numerous construction jobs.”

“In addition, we will be rebuilding and paving probably 200-plus miles of roads this season,” he said. “That work is done by local, privately owned companies, creating many road/construction jobs around the state.

Stamford state Rep. William Tong and former Secretary of the State Susan Bysiewicz, of Middletown, are Murphy’s opponents in the Democratic primary.

I guess we’re not spending money fast enough for U.S. Rep. Chris Murphy. Maybe we should raise the state taxes even more so Murphy can say he obtained more matching Federal funds to make him look good for this election season. How about cutting the spending in Washington and provide for a balanced budget, or even a budget? I’m tired of paying more and more state and federal taxes.