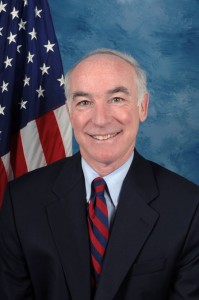 Courtney explained current Medicare coverage would remain in place for Americans currently 55 or older, while people under 55 will receive – when they retire – federal money to buy insurance.

Courtney said Congress’ selection of an arbitrary date – those retiring in 2022 – is “something that I think offends people’s basic sense of fairness.”

The change would result in two types of treatment within the same public program, Courtney said.

Courtney said his marriage illustrates the arbitrary nature of the Ryan proposal. He said he will receive traditional Medicare because he is 58, while his wife, 51, will be covered under the new program.

The Republican plan, largely attributed to Wisconsin Rep. Paul Ryan who chairs the budget committee, would balance the budget by 2040 and cut the national debt in half by 2050. The changes to Medicare are just one portion of Ryan’s Path to Prosperity plan, which recommends changes across the federal government.

According to Courtney, the average payment for seniors under the new system would be $8,000.

Republican supporters of the plan call these payments premium support because they would be paid by the government directly to insurers. Courtney and other Democrats call them vouchers.

“Maintaining a structured benefit is something a country as great as ours should be able to do,” Courtney said.

He said it is “completely questionable if not totally doubtful” if coverage would be available for people with serious health issues.

Courtney said he was once at a health care panel when a man died of a heart attack while asking a question. According to Courtney, the man’s sudden death was brought on by the stress from his wife’s coverage by Medicare + Choice, the HMO-style predecessor to Medicare Advantage.

The Republican budget will now go to the Senate where Democrats have a 53 to 47 advantage. Courtney said at least one Republican Senator, Susan Collins of Maine, had already expressed opposition to the Ryan budget.

Courtney said the Ryan plan also would abolish improvements made by the federal health care reform law, such as closing the donut hole in prescription drug coverage and providing coverage for preventive care.

Courtney said out-of-pocket costs will immediately double and eventually triple for seniors under the new Medicare.

When asked if he considered the increased costs a tax increase, Courtney said, “Absolutely.”

“That really fundamentally breaks the promise of Medicare,” he said.

He said the plan “ignores history,” specifically that half of seniors didn’t have health insurance before Medicare.

Courtney said the Ryan plan’s approach to Social Security “has not received much of the focus or attention” despite including significant changes.

He explained the plan would require a 75-year actuarial report on Social Security. “If it shows any imbalance then that imbalance would trigger an automatic process,” Courtney said.

According to Courtney, the insolvency issues faced by Social Security are “not as drastic or difficult” as those faced in the 1980s. He said Ryan’s plan is “overkill” and “over the top” on Social Security.

“The financial condition of Medicare is much more at risk and much more serious than Social Security,” Courtney said.

“It’s not the fault of Medicare,” he said, instead blaming low taxes on the wealthy for the government’s financial problems.

According to Courtney, federal health care reform postponed Medicare insolvency by a decade to 2029.

Courtney also said Ryan’s plan includes a “radical” approach to Medicaid: converting it to a block grant program managed by each state with one-third less money. He said this was particularly concerning for Connecticut’s 300 nursing homes and could “put a whole network of care dramatically at risk.”

Courtney has a website with links to more information about the Ryan plan.