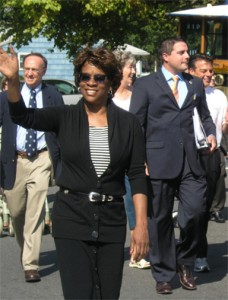 Connecticut Treasurer Denise Nappier defended her investments in real estate funds associated with basketball great Earvin “Magic” Johnson, saying the funds are too young for their performance to be criticized and that they still have the potential to increase in value.

Nappier, through her spokesman, also blamed her immediate predecessor for the poor performance of the state’s real estate investments. Paul Sylvester, a Republican Treasurer, pleaded guilty to money laundering and racketeering charges shortly after Nappier replaced him in 1999.

Raising Hale reported Friday – in advance of a Magic Johnson visit to Hartford to receive a YMCA award for investing in urban areas – Connecticut has lost $15 million in pension funds invested with Johnson’s company, Canyon-Johnson.

After publication, Nappier provided comments through her spokesman Christine Shaw. Read the unedited Q & A here.

Poor performance in the state’s pension funds primarily hurts taxpayers. The state comptroller makes actuarial calculations to determine how much the state needs to contribute to the pension funds each year. The calculations take into account the current fund balance and estimates of future payouts to retirees.

“As Treasurer, I will fulfill me fiduciary legal responsibility of ensuring the highest return on investment with the least amount of risk possible,” Wright said in response to questions about the state’s real estate investments.

According to Shaw, Connecticut invests in real estate to diversify its portfolio, generate income and capital appreciation.

She said there are opportunities to invest in urban real estate in Connecticut with “the potential to further enhance economic development within the state.”

“The Funds focus on inner city areas that have high concentrations of ethnically diverse and underserved communities,” she said.  “In employing these strategies, Canyon-Johnson works closely with local governmental and other community organizations to tailor its investments to meet local needs and fully access available economic incentives.”

Shaw said CJUF II, dating from 2005, “still has several more years to harvest investment results.” She said the fund has a net internal rate of return of negative 3.95 percent, “performance that is competitive with similar funds of that vintage.”

“No investments in Fund II have been realized and until they are the ability to predict the final performance results with certainty is unknown,” Shaw said. “Also, note that Fund III did not make its first investment until December 2009 and still has approximately 75 percent of the CRPTF’s $50 million commitment yet to be drawn and available for new investments.”

The state compares its real estate investments to the National Property Index maintained by the National Council of Real Estate Investment Fiduciaries.