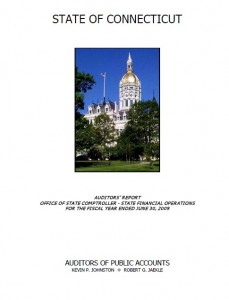 Connecticut’s two key financial reports for 2008-09 lacked critical information, according to a June report by the Auditors of Public Accounts.

The auditors lacked the information to give a complete endorsement, called an “unqualified opinion,” in both cases.

The Comprehensive Annual Financial Report, or CAFR, received a qualified opinion because an actuarial calculation for the post-employment benefits for state employees was not included in the report.

The Annual Report of the State Comptroller Budgetary Basis received an adverse opinion, a step below qualified, because certain disclosures and footnotes were not included as required by auditing standards.

According to the American Institute of Certified Public Accountants, a qualified opinion fairly represents the financial position “except for the effects of the matter to which a qualification relates.”

The AICPA defines an adverse opinion as an “auditor’s opinion which states that financial statements do not fairly present the financial position, results of operations, or cash flows in conformity with generally accepted accounting principles.”

Kevin Johnston, one of the two Auditors of Public Accounts, said the rules of the American Institute of Certified Public Accountants required his office to give the adverse opinion because the state did not follow an AICPA guideline.

“Basically, that is providing more information to the general public,” Johnston said. “It’s more of a discussion of the financial obligations of the state.”

He said one necessary section would be an extensive discussion of other debt.

Comptroller Nancy Wyman “does provide a lot of information, but it’s in a different report,” Johnston said, referring to the CAFR.

John Clark, director of budget and fiscal analysis in the Comptroller’s office, said the office made a decision not to add the disclosures to the annual report.

“We think that would be more confusing to the reader and the user,” Clark said.

He said the disclosures would also add to the length of the report and the Comptroller’s office would exceed its printing budget.

Rugens said the Comptroller’s office concluded the disclosures were “not feasible.”

The state files the two separate reports because the budget is balanced using a modified cash basis of accounting, similar to the way an individual balances a checkbook. When money is spent or received, it is noted in the state’s books.

GAAP is considered preferable because it better matches costs with revenue over a period of time. The CAFR accounts for the state’s financing using GAAP.

Rugens said his June report is a summary of findings from the CAFR and the Comptroller’s Annual Report.

Clark said the CAFR not required by state statute, but it helps sell the state’s debt. CAFR “reconciles the budgetary basis to the GAAP,” he said.

Clark said meeting the AICPA requirements for the annual report would “to a very large extent” require adding information available in the CAFR.

He said bond investors look at our Rainy Day Fund and GAAP and say, “Well, you’re in balance,” because the two approximately cancel each other out.

“This is our way of saying – while we’re auditing the books of state government – that we need to make this change” to GAAP accounting, Johnston said.

Democratic candidate for governor Dan Malloy said he wants the state to change over to GAAP accounting.

“I believe the state should adopt GAAP accounting,” Foley said. “I haven’t read the auditor’s adverse opinion, but it doesn’t surprise me.”

“The administration recognizes GAAP is the ideal we’d like to strive for,” said OPM’s Fiore.