Spending cap a potential area of agreement for Foley and Malloy 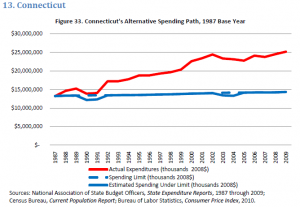 The Mercatus Center projects what Connecticut's budget would look like if it had a strict spending cap.

What would Connecticut’s budget deficit look like if the state had an aggressive spending cap?

This is the question raised by a Mercatus Center report, State Spending Restraint: An Analysis of the Path Not Taken.

In response to the study the two major-party candidates for governor offered similar answers, but revealed something of their style.

“My spending cap is reality,” said Dan Malloy, the Democratic nominee for governor.

“What I’m saying is we should have balanced budgets,” he added. “We’re just papering it over with one-timers.”

“Connecticut already has a spending cap, but the legislature has by-passed it,” Tom Foley, Republican nominee for governor, said. “I would seek to restore spending to below the maximum level allowed if the spending cap had been honored.”

Mercatus, a market-oriented think tank located in Virginia, looked at state budget deficits today and how they would like instead if states had instituted a strict spending cap.

The hypothetical scenario limits spending growth to the rate of population growth plus inflation.

Connecticut, like 49 other states, has a balanced budget requirement. It also has a spending cap, but the spending cap is linked to personal income growth. In addition to inflation and population growth, income growth includes economic growth, too.

Matthew Mitchell, Mercatus research fellow and author of the study, said there is no real reason to believe that state budget increases should be proportional to income growth.

“The other thing is it adds a measure of volatility,” Mitchell said.

“The state budget growth has far exceeded the sum of inflation and population growth,” Foley said. “Connecticut cannot afford its current level of spending and I will cut spending by 10 percent or more.”

“Honestly, that probably would not have worked for Connecticut,” Malloy said, commenting on the type of cap proposed in the Mercatus report.

He pointed to the “echo” in population that increased the proportion of school age children in the late 1990s.

“You shouldn’t spend any more than you can afford to spend,” Malloy said. “I’m not going to ascribe to a particular formula to figure that out.”

Foley also named a list of other measures he would take to control the state budget.

“I would seek to restore the integrity of the spending cap so the legislature can’t by-pass it in the future. I will seek a strengthened line item veto for my successors. I will permanently reduce the number of state agencies. I will reduce the size of the state workforce and the cost of state workers’ fringe benefits.”